A Curved Way to the Ancient Kremlin of Dmitrov 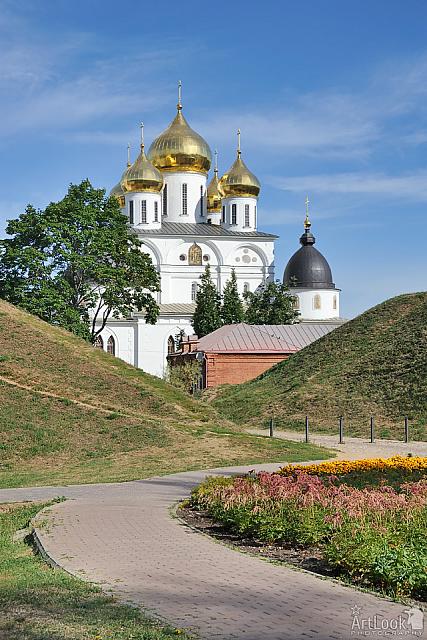 «A Curved Way to the Ancient Kremlin of Dmitrov»

The view from Kropotkinskaya street on a passage between earthen ramparts which surround the ancient part of the city, Dmitrov Kremlin, as a part of fortifications. In medieval times, wooden walls and towers were raised on these ramparts to defend the stronghold of the town.

Behind the ramparts, you can see the main landmark of Dmitrov, the magnificent Assumption Cathedral, built in 1509-1523. This church resembles Archangel Michael Cathedral, located in Moscow Kremlin. It was constructed during the reign of Ivan the Great's son Yury Ivanovich (1503–1533), who inaugurated the golden age of the town.

Kropotskinskaya street is a lovely pedestrian walkway, located near the walls of the Kremlin. It is finely embellished with flowers and street lamps, and reminds of Moscow’s Old Arbat, with only a single difference – it is very quiet and peaceful here, in comparison to the big city.

Photo #001 taken on July 22, 2014 during countryside tour to Dmitrov with my Dear client from Canada, Anna Miceta.

Woman-Sphinx with a Ball at Massandra Palace

Sculpture of a woman-sphinx with a ball at the Southern facade of Massandra Palace near Yalta, Crimea. The palace was built at the end of the 19th century in the style of Louis XIII of France (French chateaux of the Renaissance) and belonged to Russian Emperor Alexander III.