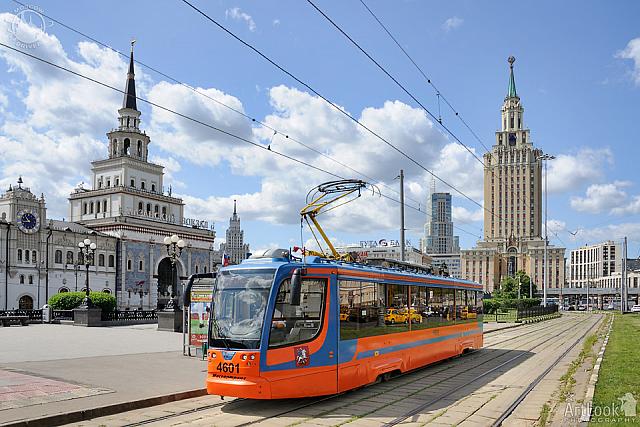 Tram KTM-23 at Komsomolskaya Square Photographed at the Komsomolskaya Square tram stop with the beautiful buildings of the Kazansky Railway Station and the Hilton Leningradskaya Hotel (one of the famous “Seven Sisters” high-rises built in the Stalinist era), this low-floor tram car (model 71-623, or KTM-23) was built at the Wagon Works in Ust-Katav in the Chelyabinsk region of Russia, and has been in service in Moscow since June 2013.

Historically, trams were the second type of transportation seen in Moscow, being the successor of the horse-drawn trams originally founded on April 6, 1899. The beginning of the 1930’s saw the high point of the Moscow tram network, when it covered both the Boulevard and Garden rings, and all interconnecting streets to the edges of the city. In 1934, when trams were the dominant form of transportation in Moscow (at that time, a city with a population of almost 4 million people), approximately 2.6 million commuters used the system daily. The last tram line built in Moscow was in 1982 in Strogino. According to statistical data from 2007, at that time there were 46 tram lines in service covering an area of approximately 181 km.

Photo #205 was taken on June 12, 2015 (Day of Russia) during a photographic tour of the "Seven Sisters" (high rise buildings from the Stalinist era) with my dear client from Belgium, Bert Nys.

In Background of Illuminated Suzdal Kremlin in Winter Evening

Portrait of my Dear clients from Hong Kong, Esther and Ricky, on the top of Ivan's Hill at Kamenka river in the background of the illuminated architectural ensemble of Suzdal Kremlin, the stone Nativity Cathedral, and wooden St. Nicholas Church in a winter evening.