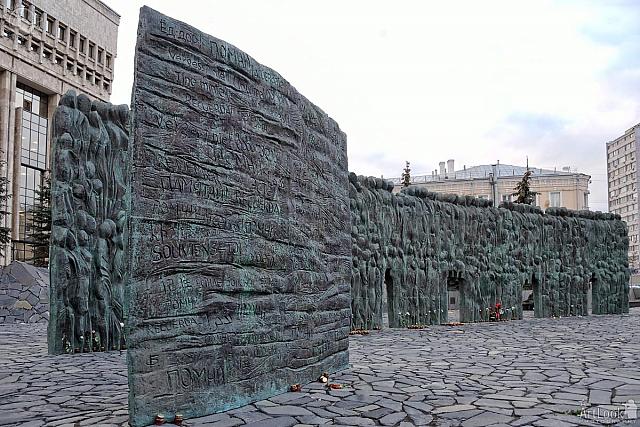 Left side angle view of the 6-meter high and 35 meters long bronze “Wall of Grief” memorial on a cloudy warm winter day. The memorial made of bronze and stone is dedicated to the victims of political repression by Joseph Stalin during the country's Soviet-era. It was unveiled on an old parking lot on October 30, 2017. The two-sided bas-relief of the memorial consists of many faceless human figures embossed on it, symbolizing the scale of repression. Between the figures in some places, there are gaps, doors, through which the visitor of the memorial will be able to feel himself in the place of the repressed and realize the value of human life. The edges of the bas-relief on both sides are tablets on which the commandment “Remember” is carved in 22 languages (on the picture is shown only the tablet from the left side).

The top of the one-domed Church of Saint George the Victorious on Poklonnaya Hill in Victory Park. It consists of the cylindrical drum with narrow windows upholding the helmet-shape gilded dome topped with an Orthodox Christian cross. The church was built in the Neo-Russian style of architecture in 1995 to mark the 50th anniversary of the Great Victory of Soviet Union in the Great Patriotic War 1941-1945.