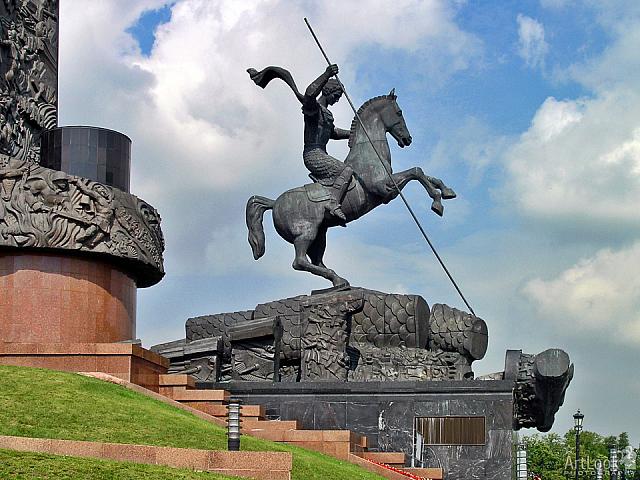 «St. George Slaying the Dragon on Poklonnaya Hill»
The statue of St. George on a granite podium at the foot of 141.8 meter (465 feet) obelisk obelisk, which stands on the main square of the Victory Park on Poklonnaya Hill and symbolizes the 1418 days and nights of the Great Patriotic War. Riding on horseback, the fearless hero strikes the dragon (a symbol of evil) with a spear. The plot is associated with one of the many miracles of the saint. The miraculous appearance of George saved the princess and many other residents of the Lebanese mountains from death: he killed the dragon that ate people. For a long time George has been seen as the protector of Orthodox warriors in Russia. In addition, St. George is the symbol of the city of Moscow.
Next Previous 8 of 9

Sculptures of Latvian and Lithuanian Republics

Two of sixteen gilded beauties of the extravagant Friendship of Nations Fountain at VDNKh park and exhibition in the background of an enormous bowl-shaped bundle of wheat, sunflowers, and hemp. The sculptures of the well-known fountain and Moscow landmark represent Latvian (at the left) and Lithuanian Soviet Socialist Republics of USSR.