Monument to Minin and Pozharsky

Photo Gallery Moscow - The Capital of Russia Monuments and Sculptures

In the small garden outside St. Basil's Cathedral on Red Square stands the monument to Kozma Minin and Dmitri Pozharsky, the heroes of the national struggle for liberation against the Swedish and Polish invaders in 1610-1612. The statue was designed by the famous sculptor, Ivan Martos, and erected in 1818 as the city's first monumental sculpture.

Originally the monument was located in the center of Red Square opposite the main entrance to Upper Trade Rows (Verkhnie Torgovye Ryady) called in Soviet times GUM. Minin pointed his arm towards the Kremlin urging his comrade to liberate Moscow. After moving the monument in 1931 behind the fence of the St. Basil's Cathedral, the meaning of the gesture has been lost. 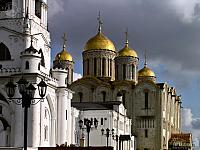