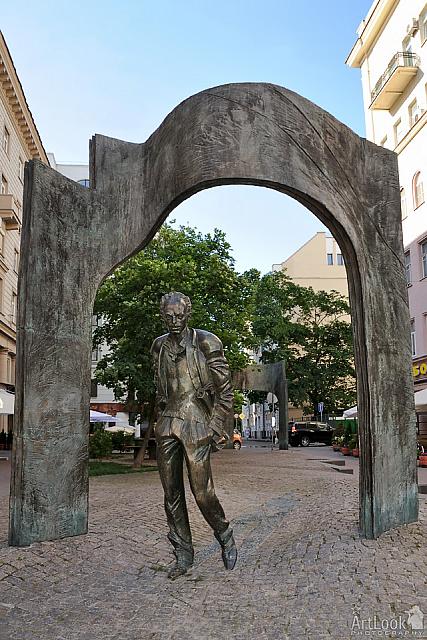 This memorial to the Georgian/Russian poet, writer, musician, novelist and singer/songwriter, Bulat Okudzhava was unveiled on May 8, 2002. The date being significant as it commemorates what would have been the poet’s 78th birthday, and Victory Day – for which the artist struggled for 3 years during the Great Patriotic War.

The bronze sculpture of Okudzhava , passing through the 2.5 m high bronze arch, together with a table and two benches, represents the yard where Okudzhava spent his childhood, and the street where he lived for many years, stands at the corner of Old Arbat Street (Stary Arbat) and the Plotnikov Passage (Plotnikov pereulok). He devoted many touching lines in his poetry to this street which he referred to as his “motherland” and “religion”. Citations from his poems adorn the bronze arches.

The sculpture, designed by G. Frangulyan, and the architects – I. Popov and V. Proshlyakov, was unveiled at a ceremony attended by the former Mayor of Moscow, Yury Luzhkov,the wife of the first President of Russia, Naina Eltsina, together with numerous officials and admirers of the artist.

The Lubyanka is the popular name for the former KGB headquarters and affiliated prison on Lubyanka Square in central Moscow. It is a large Neo-Baroque building with a facade of yellow brick designed by Alexander V. Ivanov in 1897 and built in 1898as the headquarters of the All-Russia Insurance Company.