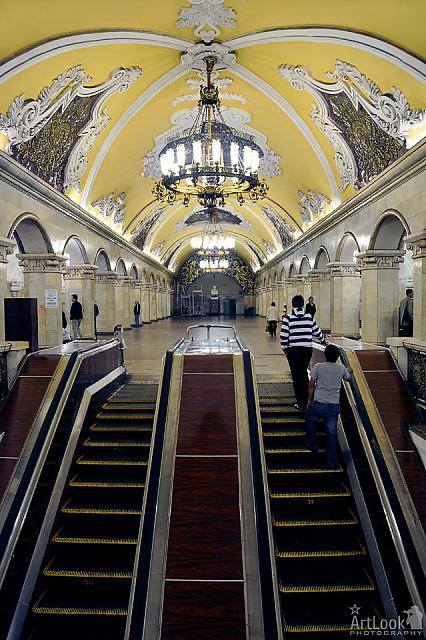 «Moscow Metro»
The Moscow Metropolitan underground railway (known as the metro) is today the most efficient form of city transport. In present time, the subway system in Moscow consists from twelfth lines with total length of railways more than 300 km (190 mi) and more than 180 stations. The average daily passenger traffic is 7 million. Ridership is highest on weekdays (when the Metro carries over 9 million passengers per day) and lower on weekends. The Moscow Metro is not merely a combination of sophisticated engineering facilities but also an ensemble of outstanding pieces of architecture and art. Some of its stations have been awarded prizes at international exhibitions and proclaimed architectural and historical monuments. On this picture people entering from escalator into one of the most beautiful and biggest stations of Moscow metro, Komsomolskaya, that was opened in 1952. One of its designers, A. Zabolotnaya, wrote that the station was planned not only as one of the city’s busiest traffic junctions, but as a kind of gateway to Moscow, which would form a visitor’s first impressions of the capital. In fact, Komsomolskaya-Ring marks the height of the Stalinist Empire style in the Moscow Metro. The station design was awarded a grand prix at the International Exhibition in Brussels in 1958. Photo #146 taken on June 03, 2012 during Moscow Metro tour with my Dear client from USA, Brandon Pelsmaeker.
Next Previous 4 of 10