Monument to Conquerors of Space 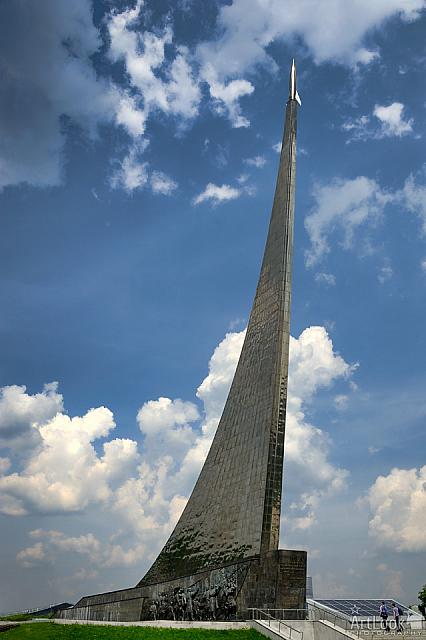 «Monument to Conquerors of Space»
The one of the majestic monuments of the XX century named "To Conquerors of Space" was erected on Prospect Mira (Avenue of Peace) near metro station VDNKh in November 1964. The design of 100-meter monument, that shows the rocket rushing into the sky over capital and leaving a silvery trail, was created by sculptor A. Faidysh-Krandievsky and architects A. Kolchin and M. Barsch. The 250-ton monument was made from polished titanium. This metal was used in rocket production is everlasting and resists ageing under all conditions. The mirror-bright titanium panels of complex configuration with thickness of 1,5 mm look like scales covering the load-carrying structure. On a day of the 20th anniversary of the first space flight performed by Yuri Gagarin on April 12, 1981, in the stylobate (basement) of the monument was opened the Memorial Museum of Cosmonautics. Photo #029 taken on May 13, 2013 during a tour of the best sights of Moscow being filmed for a Brazilian television show with my Dear clients Natalia Tavares (Brazil) and Daniel Fern?ndez (Spain).
Next Previous 3 of 10