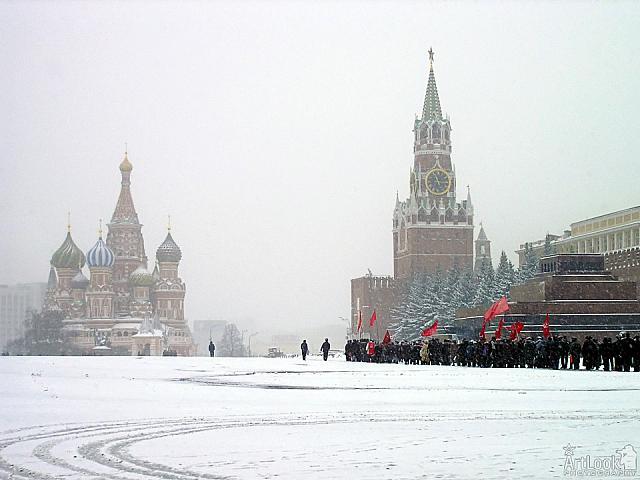 «Red Soviet Flags on Snowy Red Square»
In spite of heavy snowfall on December 21, 2005, a lot of supporters of former Communist dictator Josef Stalin, mostly people from old generation, came to celebrate his birthday in Red Square. Quietly walking with red banners and portraits of Stalin through the blocked for safety Red Square, they laid down flowers on his grave behind Lenin’s Tomb (Mausoleum) to mark the 126th anniversary of his birth. For the nostalgic supporters Stalin remains revered for his almost 30-year rule when he led Russia to the status of a great power and defeated Nazi Germany in World War II. He died in 1953. Photo #008 taken on December 21, 2005 during Moscow city tour with my Dear Clients from USA, Lannie Thompson and Matt Hamann.
Next Previous 72 of 78 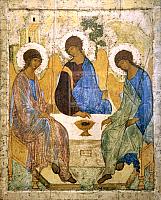 The Old Testament Trinity is the most beautiful and perfect Russian icon. It was created in 1420s for iconostasis of Trinity church by greatest icon-painter of medieval Russia, Andrei Rublev, to honor the memory of the Venerable Sergius of Radonezh (1314-1392).