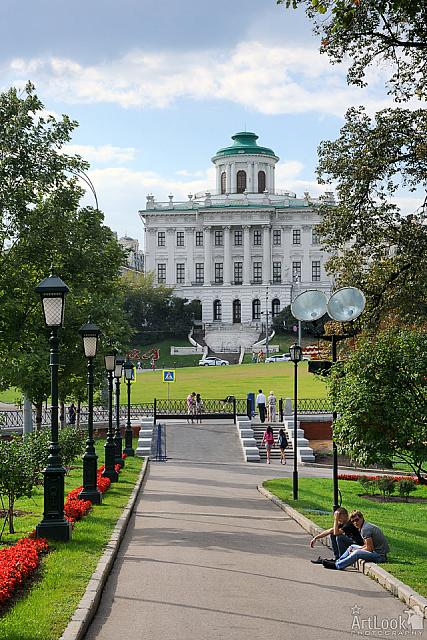 Impressive view of Pashkov house from Borovitskaya tower of Moscow Kremlin, the entrance into the Kremlin Armory museum.

The Pashkov House is the famous Neoclassical mansion that stands on a the Vagankovsky Hill overlooking the western wall of the Moscow Kremlin. The beautiful palace of white stone in front of the kremlin was erected in 1784-1786 by a Muscovite nobleman, Pyotr Pashkov, a retired Captain Lieutenant of the Guards Semenovsky Regiment. Its splendid neoclassical design attributed to one of the most famous Russian architects of 18th century, Vasili Bazhenov. It used to be home to the Rumyantsev Museum (Moscow's first public museum) in the 19th century. After renovation of the building in 2003-2007 years, the former palace and museum became the part of the Russian State Library.

The Alexander Gardens were laid out by Osip Bove on Borovitsky Hill at the North-West wall of Moscow Kremlin in 1820-1821. It named after Emperor Alexander I, the eldest son of Paul I and grandson of Catherine the Great, to commemorate the Russian victories over Napoleon (1812-1814).

Photo #013 taken on August 23, 2013 during tour of Kremlin Armory Museum with my Dear clients from USA, Shirley Smith and Don Elliott.

The view from a corner of GUM building, the well-known mall on the Red Square, on the beautiful St. Basil's Cathedral. The Main Department Store (GUM) is lavishly decorated with flowers during the summer festival.