Moscow Winter Cityscape with Monument to Peter the Great 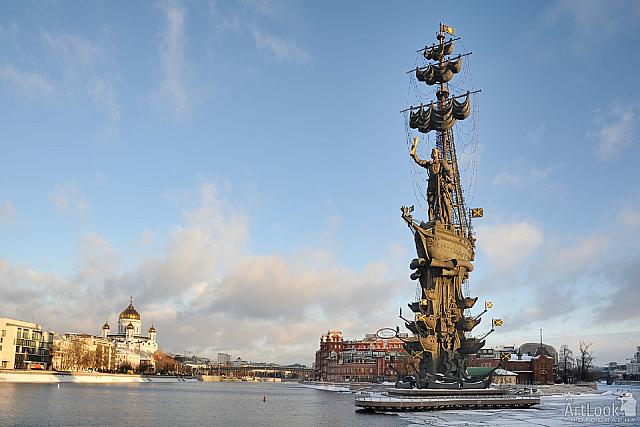 «Moscow Winter Cityscape with Monument to Peter the Great»

Winter cityscape of Moscow looking from Krymskaya (Crimean) Embankment on Moskva river (Moscow river) and the monument to Peter the Great on a cold and sunny winter's day. The impressive 98m (328ft) high monument from steel and bronze was erected in a mile from Moscow Kremlin in 1997 to commemorate the 300th anniversary of the Russian Navy. It is one of tallest statues in the world (8th place). The giant monument was created by the project of sculptor Zurab Tsereteli and has the form of a pillar standing on a granite foundation that is crowned by a bronze boat, with the figure of Peter the Great growing out of it.

The majestic Neo-Byzantine style Cathedral of Christ the Savior covered with white marble and topped with a huge gilded dome is in the background of this picture. The red brick building of former chocolate factory “The Red October” is behind the monument.

The Russian wooden hand made chess at the craft market "Vernisazh".