Tweet
Photo Gallery Moscow - The Capital of Russia Cathedrals and Monasteries of Moscow Church of St. George on Pskov Hill
Next Previous 6 of 7 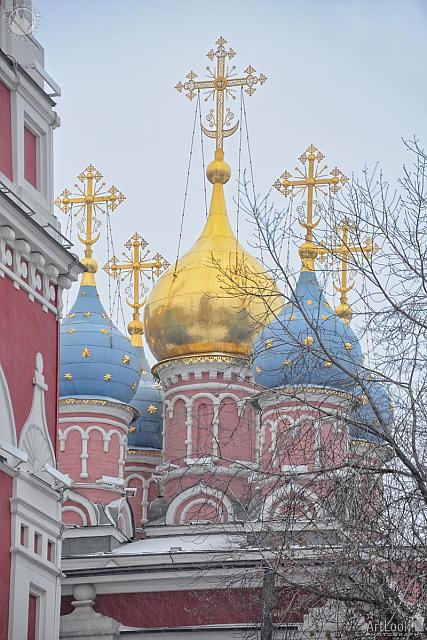 Zoomed view from bell tower (its corner at the left) on the elegant onion-shaped domes of the Church of St. George (Intercession of the Most Holy Theotokos) on Pskov Hill framed by a tree in snowfall, winter season. The elegant blue and gold cupolas sit on cylindrical drums decorated with belts of arches and columns (arcature-columnar belts) and topped with open-work gilded Orthodox crosses. Light drums of the heads surrounded by Moscow keel-shaped kokoshniks at the bottom. The church built in 1657 is a vivid example of Moscow architecture of the mid-seventeenth century, the golden period of Russian identity and the Russian Uzorchiye (pattern-work) style.