Tweet
Photo Gallery Moscow - The Capital of Russia Cathedrals and Monasteries of Moscow Church of St. George on Pskov Hill
Next Previous 7 of 7 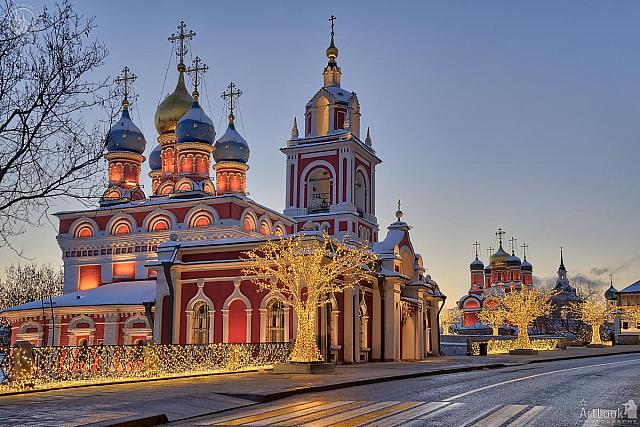 Festive view of illuminated Church of St. George (Intercession of the Most Holy Theotokos) on Pskov Hill on Varvarka street decorated with New Year light installations in twilight during winter holidays.

The church built in 1657 is a vivid example of Moscow architecture of the mid-seventeenth century, the golden period of Russian identity and the Russian Uzorchiye (pattern-work) style. It is topped with five heads with onion shaped cupolas with open-work Orthodox crosses, Moscow keel-shaped kokoshniks (decorative elements in the traditional Russian architecture), arcature-columnar belts on circular drums, and other decorative elements typical for this style of architecture. The bell tower behind the church was constructed in 1818 in neo-Gothic style in the site of the old one that was badly damaged after fire in September 1812 during occupation of Moscow by French (Napoleonic) troops.

The last restoration of the church was in 2015 during the construction of the new park Zaryadye. The church, its northern aisle (addition from Varvarka street), refectory, and the belltower (behind the church) were painted in red and white colors, and the lighting of architectural details was also installed.

Angle view of the golden onion shape cupolas of the main cathedral of St. Nicholas monastery in Pereslavl-Zalessky The impressive domes shine with crosses against the blue sky with white clouds. The beautiful St. Nicholas church was built in 1999-2003 in the style of XIV-XVI century Russian architecture (design by architect V.