At the Entrance to St. George Church in Winter Twilight (Angle View)

Tweet
Photo Gallery Moscow - The Capital of Russia Cathedrals and Monasteries of Moscow Church of St. George on Pskov Hill
Next Previous 2 of 7 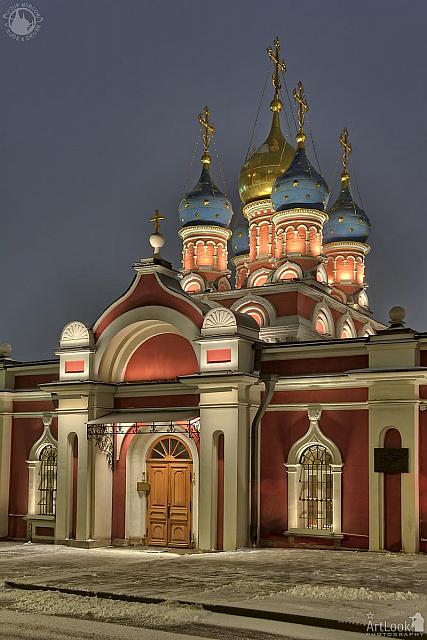 «At the Entrance to St. George Church in Winter Twilight (Angle View)»

Angle view from Varvarka Street on the entrance of the beautiful Church of St. George (Intercession of the Most Holy Theotokos) on Pskov Hill illuminated with spotlights in the twilight under a snowfall in the winter season.

The church built in 1657 is a vivid example of Moscow architecture of the mid-seventeenth century, the golden period of Russian identity and the Russian Uzorchiye (pattern-work) style. The main feature of this style is that the cubic volume of the church is a four-corner tower placed on a high base. The squared tower are crowned with the remaining two tiers of the Moscow keel-shaped kokoshniks (decorative elements in the traditional Russian architecture) remaining after the reconstruction of the roof. All drums are decorated with arched-columnar belts and end with attractive onion-shaped cupolas topped with diamond-shaped crosses.

In 1812, the church on Varvarka street was badly damaged during the invasion of Napoleonic troops. The entrance of the church with aisle of Saint George the Victorious from the North side was added to the church after reconstruction in 1818. Built in a pseudo-Gothic style, it differs sharply from the architecture of the main building of 17th century.

In 2013, during the construction of the new park Zaryadye, extensive restoration was completed at the Church of St. George on the Pskov Hill as well. Restored stone details of platbands and kokoshniks. The church received a new color scheme - all buildings are painted in red and white colors, and the lighting of architectural details was also installed.

Inside the Cathedral of St. Dmitry of Rostov

View on the fascinating interior of richly decorated Dimitrievsky Cathedral (Cathedral of St. Dmitry of Rostov), the eminent sample of the Russian classicism epoch. The church was built in 1794-1802 on money of Count Nikolai Petrovich Sheremetev. Talented Moscow artisans and architects participated in design of this building, such as E.