Under the Cupola of Resurrection Church in Sretensky Monastery 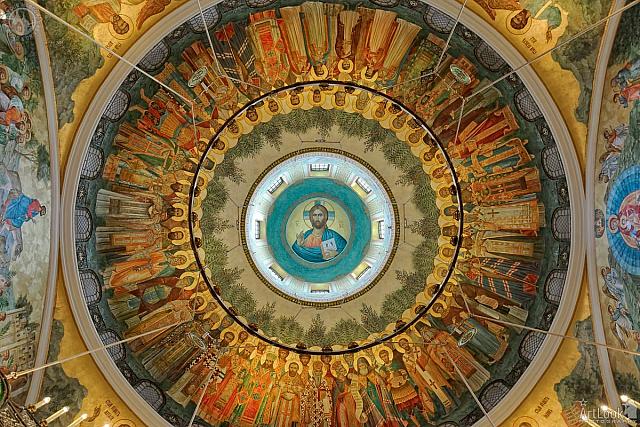 «Under the Cupola of Resurrection Church in Sretensky Monastery»

The magnificent interior of the new Church of the Resurrection of Christ and the New Martyrs and Confessors of the Russian Church with the view of the cupola with frescoes of saints. On the dome of the church, we see images of saints of different countries and eras who, together with us, appear before God and participate in our prayers. Among the many saints are the holy Royal Martyrs (family of Nicholas II Romanov) at the top of the picture, and next to them is depicted the recently glorified in the faces of the saints, their personal doctor, the martyr Evgeny Botkin. The frescoes also depict those new martyrs whose descendants still live and remember the feat of their relatives. For example, the central fresco depicts two priests and a martyr from the Pravdolyubov family. Their grandchildren and great-grandchildren came to the consecration of the cathedral on May 25, 2017 and recognized their grandfathers.

On the way to Sofiiskaya Tower

At the end of 17th century Tsarina Sofia, the half sister of Peter the Great, was forced to take monastic vow and withdrawn from Kremlin to Novodevichy convent after unsuccessful attempt to recruit the Streltsy against her brother. She was almost imprisoned there and spent the rest of her life in a small two storage chamber built at one of the towers of the convent (on the background of the picture you can see the beautiful white and red crenelated tower in baroque style).