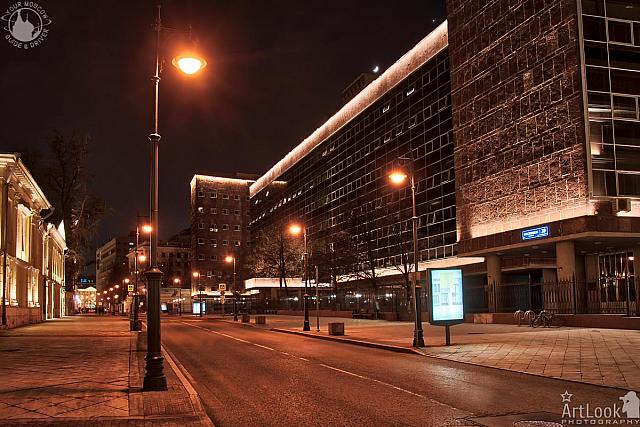 Night view of Myasnitskaya Street with illuminated old style street lamps and the main building of Tsentrosoyuz (the Central Union of Consumer Cooperatives) in a spring evening. The complex of several seven-story administrative buildings covered with dark pink tuff was built in modern Constructivist (avant-garde) style in 1930-1936 by the project of the outstanding Swiss-French architect and innovator Le Corbusier, with the participation of Russian modernist Nikolai Kolli. It became the biggest in Europe office center at the time.

Built on Le Corbusier's favored piloti – the reinforced concrete pillar – the building facade is a dramatic, smooth, glazed curtain wall, framed at the top and bottom by strips of red volcanic stone blocks from the Caucasus, and at the sides by projecting volumes clad in the same red stone. The building includes office space for 3,500 people, a restaurant, lecture halls, and a theater. It now houses the Russian Federal Service for State Statistics (Rosstat). 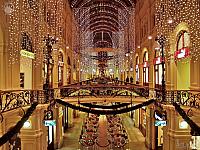 Beautiful hanging Christmas lights became the part of New Year decorations of the interior of GUM mall, the main universal store in Moscow located on the Red Square, for the winter holidays 2006-2007.