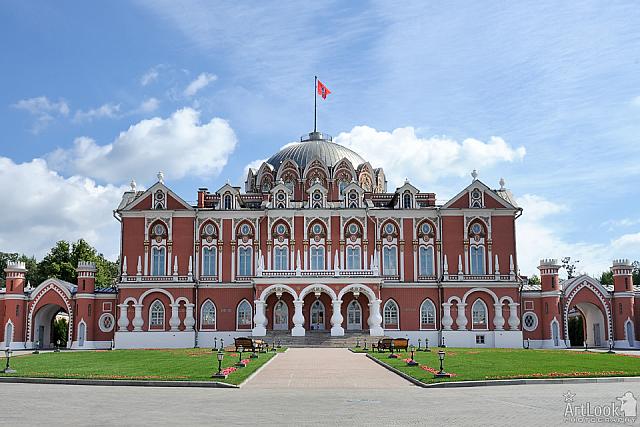 With a unique history that dates back to the late 18th century, Petrovsky Travelling Palace is regarded as one of the city’s most beautiful architectural jewels. It was built for Catherine the Great and designed by the famous Russian architect Matvei Kazakov in 1775-82. From that time the palace became the last overnight station of royal journeys from St. Petersburg to Moscow, where tsarina or trar had a chance to rest before entering Moscow. It was from here that Russian tsars began their journeys to the Kremlin for their coronation.

After long reconstruction started in late 1990s the palace was officially reopened in 2009 as the House of Receptions of the Government of Moscow. In present time they use it as a hotel for visiting dignitaries to Moscow and host official receptions. It's not possible to get into the palace without special organized tour, but you can see the building on your way from/to Sheremetevo airport.

Figure of Warrior between Pillars of Triumphal Arch

Between each pair of 12-meter-high and 16 ton-weight cast-iron pillars forming the base of Triumphal Arch in Moscow, you can see on high pedestals the powerful cast figures of warriors with heart-shaped panels and long spears, wearing old Russian chain-mail and helmets and with cloaks flung over their shoulders in the manner of Roman mantles.