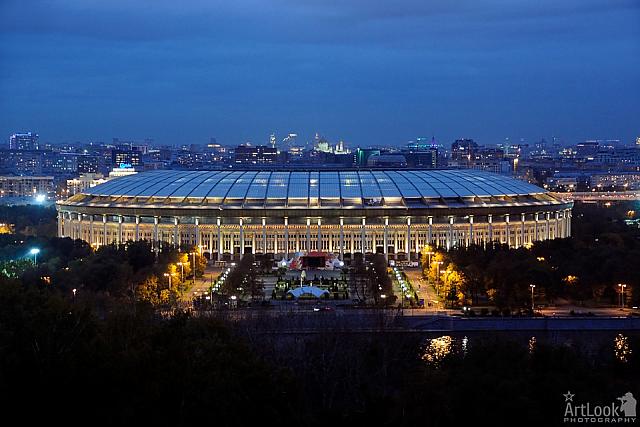 Getting dark over the Grand Sports Arena of the Luzhniki Olympic Complex in Moscow. Overview the biggest sports stadium in Russia from Vorob’yovy Gory (Sparrow Hills), 85 meter above level of Moscow River (Moskva-Reka).

It was the chief venue for the 1980 Summer Olympics, the spectator capacity being 103,000 at that time. The events hosted in this stadium were the Opening and Closing Ceremonies, Athletics, Football finals, and the Individual Jumping Grand Prix. Tenants: USSR/Russia national football team (1956-2013), Summer Universiade (1973), Summer Olympics (1980), UEFA Cup Final (1999), UEFA Champions League Final (2008), World Championships in Athletics (2013).

Luzhniki Stadium hosted its last football match in May 2013 and was closed after the IAAF Athletics World Championships in August 2013 for large redevelopment in preparation to host the final of the 2018 World Cup.

The stadium can be reached with the red metro line 1. Station Sportivnaya, or alternatively Vorob’yovy Gory, both lie within short walking distance of the stadium. Line 1 directly connects with Moscow’s city centre, and the ride from either Okhotny Ryad or Biblioteka takes no more than 10 minutes.

Luzhniki Stadium lies practically adjacent to Moscow’s Third Ring Road. If arriving by car, orientate yourself with regards to the Moscow River and take the first exit after crossing the Moscow River at the bend where the stadium is located.

Monastery Domes and Towers Against the Grey Clouds

The shining beautiful cupolas, towers and roofs of Holy Trinity-St. Sergius Lavra in Sergiyev Posad, the top-ranked monastery and spiritual center in Russia in the background of the grey clouds before rain. The gilded domes of the Holy Life-giving Trinity Cathedral (1422-1423) with the Church of St.