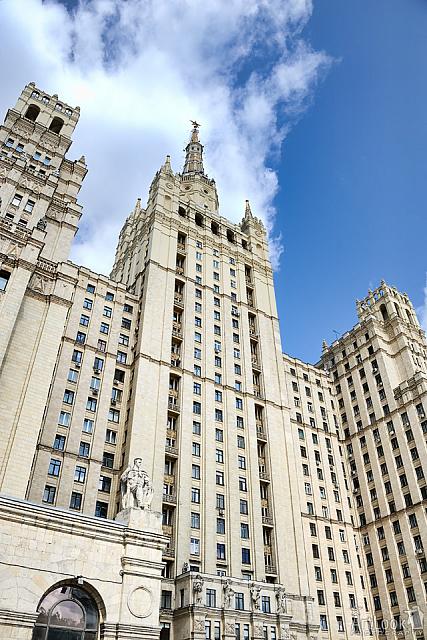 The Kudrinskaya Square Tower, is one of seven identical skyscrapers (known as the Seven Sisters) which were built during the Stalin regimen after WWII. These seven famous buildings, constructed between the end of the 1940’s and the beginning of the 1950’s to commemorate the 100 year anniversary of Moscow City have contributed significantly to the architectural style of the city skyline.

This 156 metre high residential tower was completed in 1954, just one year after Stalin’s death, and contains approximately 450 elite apartments on 24 floors. The apartments were originally home to famous pilots and other high-ranking aviation industry professionals, together with the nomenclature of the Central Committee of the Communist Party, and the Council of Ministers of the USSR.

At the bottom of this picture, taken from the corner of Kudrinskaya Square, one of the many sculptures that decorate the facade of the building can be seen. The central tower culminates in a 30-meter spire, with a 5-pointed star at the tip.

Angle view from Prospekt Mira (Avenue of Peace) on one of the most recognizable symbols of former USSR, the sculpture of the Worker and Collective Farmer (Rabochiy i Kolkhoznitsa) at night.