One of the most memorable buildings of the Stalinist period in Moscow is a building located on the Kudrinskaya Square overlooking Sadovoye Koltso (the Garden Ring). Ashot Mndoyants and Mikhail Posokin, architects responsible for unique design of the building, started their work on the project in 1948. The skyscraper was completed in 1954 after Stalin’s death. This striking building in the very center of the capital has 25 floors in total and is 160 meter high.

It is actually one of the 7 towers that define the skyline of Moscow, which explains their name in the English language – Seven Sisters. Interestingly enough, this name is not really used by the local people and the buildings of this period are simply called Stalinskie Vysotki (Stalinist skyscrapers). The style of the tower is defined as neoclassicism, but people most often refer to such style as “wedding-cake” because of the way these types of buildings are shaped.

The building, which has about 450 apartments, was initially intended for aviation industry elite of the Soviet Union. However, nowadays anyone who has enough money has the opportunity to rent an apartment in this incredibly prestigious place. These days, besides apartments, there are several stores, cinema and even a bowling club. 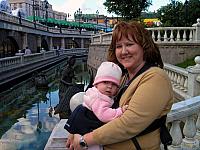 At Sculptures on the artificial Neglinka River

My Dear client Victoria Moran from USA and little Kaitlyn adopted in Russia. The photo was taken near Manezhnaya square in Alexander Upper Garden where in 1996, it was built an artificial pond with fountains and sculptures to represent the bed of Neglinnaya (Neglinka) River.