The Building on Kotelnicheskaya Embankment at Autumn Twilight 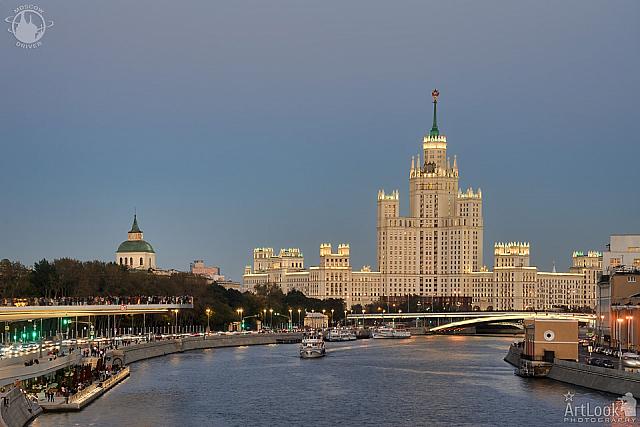 «The Building on Kotelnicheskaya Embankment at Autumn Twilight»

Evening view from Bolshoi Moskvoretsky Bridge on the recently renovated and professionally illuminated with new powerful spotlights in white and green colors Stalinist high-rise building on Kotelnicheskaya embankment in autumn season when it was getting dark. The new passenger pier of Zaryadye park for river boats floating Moskva-River with hovering walking bridge above can be seen at the left on the picture.

The residential building on Kotelnicheskaya embankment was built in 1947 - 1952 by the project of prominent Moscow architects Dmitry Chechulin and Andrei Rostkovsky. It is one of the two apartment complexes of the seven sister buildings, the famous Stalinist high-rises founded in 2 years after the Great Patriotic War (1941-1945) to commemorate 800 anniversary of Moscow city. The main tower has 32 levels and is 176 meters (577 ft) tall. The building was intended as a housing for Soviet elite, academicians, scientists, writers, actors and other talented people.

The modern floating bridge spanning the Moscow River and its embankment without support became one of the highlights of the new park Zaryadye in the historical center of Moscow city, not far from St. Basil’s Cathedral and Red Square. The park was opened by President of Russia Putin and Mayor of Moscow Sabyanin on Saturday, September 9, 2017, and came as part of observances commemorating Moscow’s 870th anniversary. The park includes artificial micro-climate areas with plants representing Russia’s steppes, tundra, wetlands, and forests.

Mr. Potato on the Red Square

Once been found in Prague, Mr. Potato started to travel around the World with Kate and now his destination is Moscow. What the cool pictures can be made on the Red Square in front of soooo amazing cathedral of St. Basil’s, the one of Russia’s best and the most famous landmarks! Just sometimes he has problem with his big tongue, maybe because of being too much excited! :-)