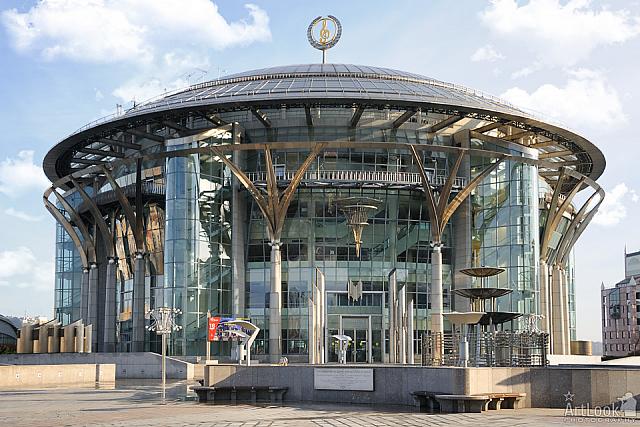 The building of Moscow International House of Music (Dom Muzyki in Russian, short MMDM) was built in 2001-2002 by a leading Turkish construction company ENKA on the Kosmodamianskaya Embankment off the Garden Ring Road in the area of Krasnye Hilmy (Red Hill). The authors of this modern project made from glass were architects Yu. Gnedovskiy, V. Krasilnikov, D. Solopov, M. Gavrilova, S. Gnedovsky, and engineers S. Belov, I. Kuznetsova. This information can be read from memorial tablet in front of the building. This project won the Khrustalny Dedal architectural award at the XI All-Russian Zodchestvo festival. This is the biggest music center in Russia, the construction cost of which was $200 million, and it was financed entirely by the City of Moscow.

The complex of the Moscow International Music House includes three concert halls built according to individual design projects. They are set on different levels and have their own entrances. On this picture is the view on its main entrance to the Svetlanov hall. Being the largest it can accommodate up to 1699 people. In 2004 the largest organ in Russia was installed in this hall. It was designed in a "large" organ style of XXI century in Russia through the cooperation with the German firms of Glatter-Goetz and Johannes Klais where it was manufactured. After it passed various technical requirements and was tuned in Bonn, and the huge structures were transported to Moscow. The installation of the organ lasted for roughly 6 months in order to achieve perfect results and realize the full potential of this organ.

Unique acoustical properties, lush interior, and sophisticated technical capabilities of the MIMH concert halls allow for it to house all sorts of concerts and musical performances.

Winter Suzdal landscape from high bank of Kamenka river near the walls of St. Euthymius monastery of Our Savior. In background on this picture, the Church of the Exaltation of the Holy Cross (1696) is rising behind the trees in a village Korovniki (edge of Suzdal).