The building of Vakhtangov Theatre on Old Arbat 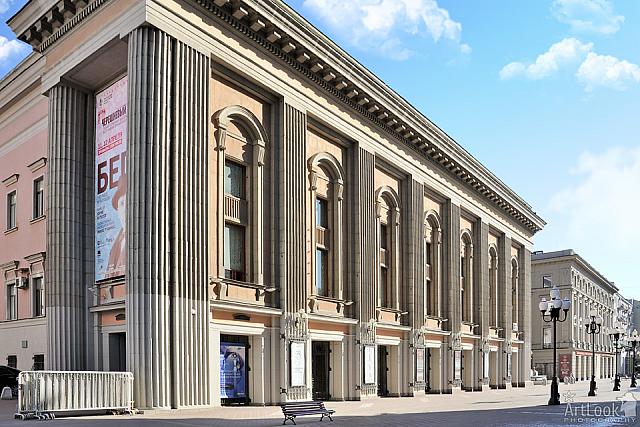 «The building of Vakhtangov Theatre on Old Arbat»

This large colonnade building at 26 Old Arbat street, has been owned for almost 100 years by the remarkable Vakhtangov Theatre. After the Soviet Socialist revolution it became the cultural hub of the central heritage district of Moscow. The numerous lanes that branch out from the main street commemorate the many trailblazers of this famous theatre, with the names of these celebrities inscribed on memorial plaques embedded on stone monuments around the building, making the atmosphere of this side of Old Moscow even more remarkable.

In 1873 a stone house was built by architect A.S. Kaminsky on this site for Vasiliy Nikitich Sabashnikov, the father of publishers Michail and Sergei Sabashnikovs. The brothers were known for their serious preparation of printed texts, and books published by Sabashnikovs were always in demand by professionals and bibliophiles. The staff of the publishing house consisted of only a few people, with all experts being hired by the owners only for a particular job. It was in this house that Michael and Sergei Sabashnikovs began their publishing business.

The house of the Sabashnikovs overgrown with extensions, eventually passed to other owners. Following the 1917 Soviet Socialist Revolution, the building was taken away (nationalized) from the last owner, V.P. Berg, and was given to theatrical studio under the direction of Yevgeny Vakhtangov. At that time it was known as the Third Moscow Art Theatre. In 1921 the architect L. Mashkov commenced a project of reconstruction on the building to convert it to a theatre. Among other changes, he created a hall for 150 spectators in the large living room to the left of the grand staircase.

Yevgeny Vakhtangov died in 1922. In 1926, the building became the Vakhtangov State Theatre. Over the years the theatre has been extensively reconstructed, and by 1929, the capacity of the hall could accommodate up to 1100 people. Finally, on the site of the yard of the old house, a new large auditorium was built. The facade of the theatre is decorated in the tradition of constructivism.

Designed by two Russian architects, Posnik and Barma (who may, in fact, have been one person), the building of St. Basil’s Cathedral is shaped as a flame of a bonfire rising into the sky. The view on Russia's most recognizable church that was built in 1561 from the wall of Moscow Kremlin (western side) in summer season.