A Kremlin Ruby Star on the Top of Spasskaya Tower 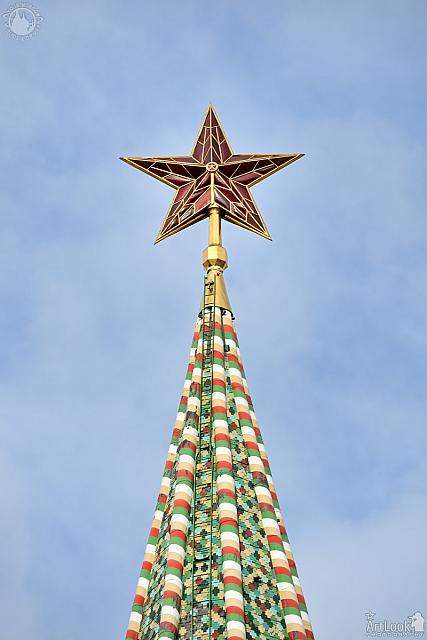 «A Kremlin Ruby Star on the Top of Spasskaya Tower»

View from the Red Square on the top of Spasskaya (Savior’s) Tower of Moscow Kremlin decorated with the pentagonal soviet star made of ruby glass. The distance between the end points of beams of the star installed on the Spasskaya tower is 3.75 meters (12.3 ft.).

The first Kremlin star was installed on top of the Spasskaya Tower on October 25, 1935. During the next week, another three stars were installed on the Troitskaya, Nikolskaya, and Borovitskaya towers. These stars replaced huge copper two-headed eagles, installed in pre-revolutionary times, which were a part of the Coat of Arms of Imperial Russia.

In 1937, these stars were replaced with new ones made of ruby glass, in time for the 20th anniversary of the October Revolution. One more star was also installed on the Vodovzvodnaya tower.

Despite the considerable mass of each star (approximately 1 ton (0.98 long tons; 1.1 short tons)), they revolve as the wind changes its direction. Because of its form, each star always positions itself with its frontal side against the wind.

Beautiful new year decorations of GUM mall during the current winter holidays 2017-2018. A close-up picture of the festive new year air balloon with Christmas gifts in a basket flying in the Main Department Store of Russia on Red Square in Moscow.