Hammers and Sickles Framed with Ears of Wheat 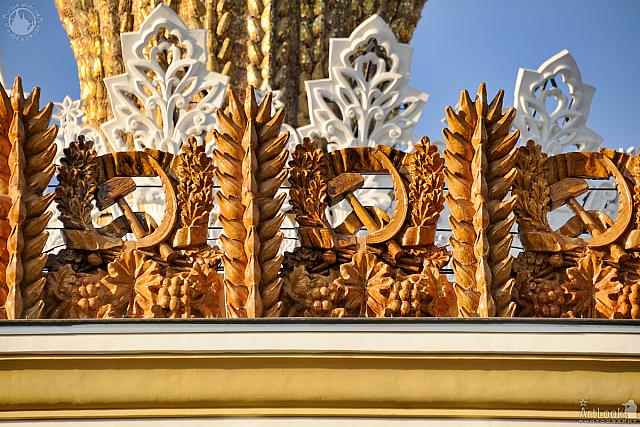 «Hammers and Sickles Framed with Ears of Wheat»

Exterior decorations of the roof of Pavilion #58 "Agriculture" with fragments of Soviet symbols “hammer and sickle” framed with ears of wheat at VDNKh exhibition in Moscow. The beautiful pavilion was built in 1939 on the grounds of the recently founded Agricultural Exhibition of Soviet Union and reconstructed in 1947-1954 under the design of architects A. Tatsiy and K. Ivanchenko. The exhibition was renamed as VDNKh – All-Union Exhibition of Achievements of People’s Economy in 1959. The pavilion "Agriculture" was known as "Ukraine", "Ukrainian Soviet Socialist Republic" until 1964.

Photo #036 taken on June 16, 2018, during a tour of VDNKh exhibition with my dear client from Hong Kong, William Szeto.

The side view of the world largest helicopter Mil V-12 (Mi-12) built in 1967 in winter snowy day. NATO reporting name for this giant helicopter was given “Homer” and the name “Mi-12" would have been the name for the production helicopter. Since the V-12 never went into serial production and only two prototypes were built, the name "Mi-12" was never officially adopted.