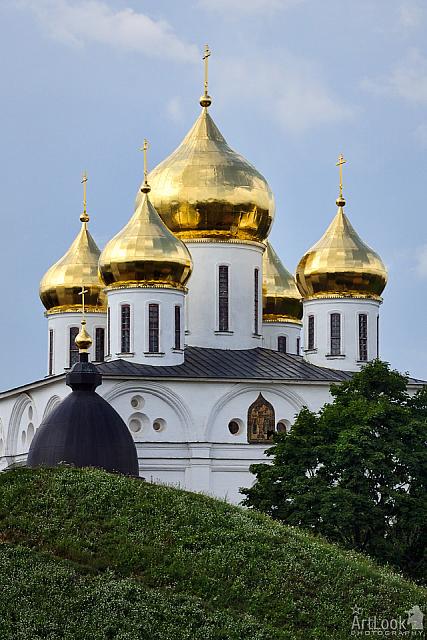 Here you can see the beautiful domes of the Assumption Cathedral in Dmitrov’s kremlin, hidden behind the earthen rampant from Kropotkinskaya street. This cathedral was founded on the grounds of kremlin in 1509 and finished in 1523. It is unknown who the architect of this cathedral was; however, everyone agrees that its design was particularly elegant want compared to other buildings of the same time. The architectural design of this cathedral resembles the one of Archangel Michael Cathedral, located in Moscow Kremlin. Though this cathedral has more Russian national features, it is also more modest in comparison to other Archangel Michael Cathedral.

Photo #147 taken on July 16, 2013 during Dmitrov city tour with my Dear client from Canada Anna Miceta.

Taken in Autumn from the earthen rampart that was once part of the Suzdal Kremlin’s fortifications, we see the distinctive red walls of the Assumption Church. Originally constructed in the second half of the 17th Century, and rebuilt in 1720 after a devastating fire raised the city in 1719, the Church of Assumption (Upsenskaya Tserkov ) is located in the eastern part of the kremlin on Kremlevskaya Street on the “Princely Courtyard”, the same road where the Gate Tower of the Prophet Elijah once stood.