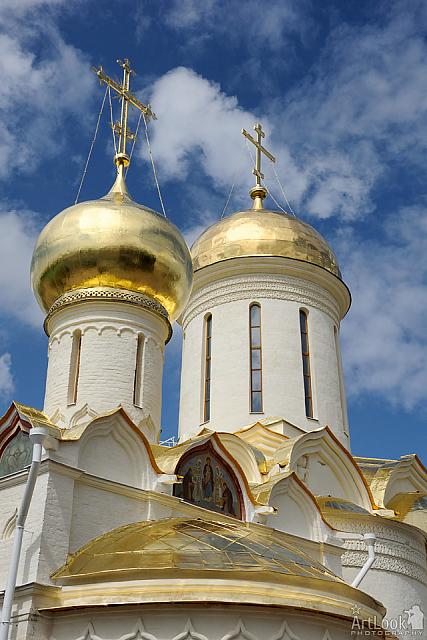 Angle view of gilded cupolas of the ancient churches of Holy Trinity - St. Sergius Lavra in Sergiyev Posad. In background at the right on this picture is rising to the beautiful skies a helmet-shaped cupola with cross of ancient Trinity Cathedral constructed in stone on the grounds of the monastery in 1422-1425. It is the spiritual and historical centre of the monastery where placed in silver shrine holy relics of St. Sergius of Radonezh, the saint of the Orthodox Church revered in Russia for many centuries. At the left on the picture is the onion-shaped dome of church in the name of St. Nikon of Radonezh, St. Sergius successor, constructed in 1548 at the southern wall of the Trinity Cathedral.

Photo #189 taken on May 25, 2016 during one day countryside tour to Sergiyev Posad with my dear client from USA, Sergei Groshev.