Crowned Church of the Theotokos of the Sign at Dubrovitsy 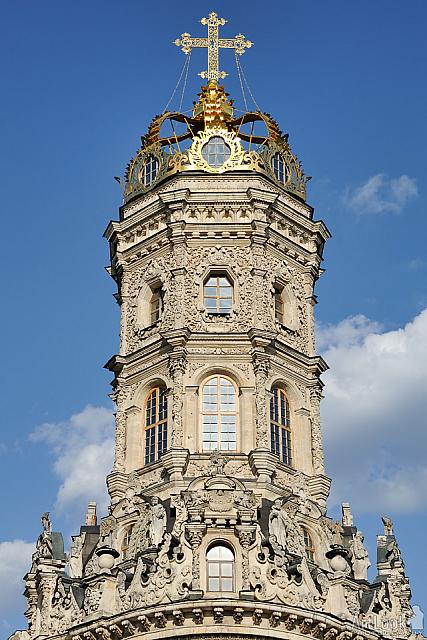 «Crowned Church of the Theotokos of the Sign at Dubrovitsy»

Top of the Church of the Virgin of the Sign in Dubrovitsy Estate located near the town of Podolsk, just south of Moscow. Construction of the unique and only one church built in European Baroque, Catholic style, was carried out from 1690 to 1698 years by foreign artisans, possibly Italian-Swiss, on the money of Prince Boris Alekseevich Golitsyn (1651-1714), Muscovite grandee and tutor to Peter I. The legend says that the church was built as a sign of reconciliation between Golitsyn and Peter the Great, and that the tsar even helped to build it. The octagonal church was constructed out of local white stone and left bare. It is decorated with figures of saints, apostles and angels, contrary to Orthodox tradition of building, that had viewed statuary as potentially idolatrous.

Rather than the traditional cupolas, the church was topped by a shining gold crown which suggests the regal authority in honour of Emperor Peter the Great’s reign, and also symbolizing the crown of Christ.

Due to the structure’s flagrant disregard for Orthodox tenets, Patriarch Adrian (1627-1700) refused to bless it. But upon Adrian’s death in 1700, Peter replaced him with the reformist Stefan Yavorsky (1658-1722). The latter agreed to the blessing, and the church officially opened in 1704.

At the Flower Parterre of the Stone Flower Fountain

Amazing landscaping with colorful flowerbeds at VDNKh park in the background of Stone Flower fountain and the pavilion No.58 “Agriculture” (formerly known as Ukrainian Soviet Socialist Republic's pavilion).