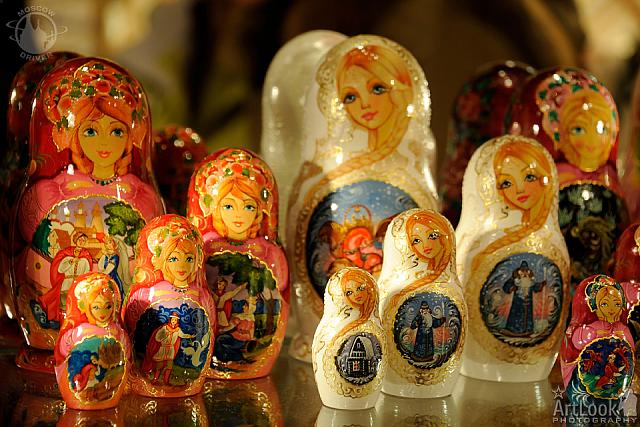 The fabulous Matryoshka dolls, with miniature paintings of scenes from Russian fairy tales, in one of the souvenir shops on Old Arbat, the famous pedestrian street in historical center of Moscow city. The history of one of the most famous and well-known Russian souvenirs started before the revolution at the end of the 19th - beginning of the 20th century, when they started to make nesting wooden dolls; dolls with smaller dolls stacked within the bigger ones. The idea of stacked dolls was taken from Japan, but became popular only in Russia and they called it with the name that comes from Matryona, or Matryosha, which was a very popular female name at that time. Traditional Russian Matryoshkas are usually painted by artists or students in bright colors using different styles of art schools (Palekh, Gzhel, Zhostovo or Khokhloma) with beautiful female images, stunning coats and as an addition they may be adorned with miniatures showing stories from different Russian fairy tales.

Photo #317 taken on November 11, 2012 was taken with my Dear Clients Johnny and Victor Weir-Voronov, Patty Weir and Diane during shopping on Old Arbat street.