Arsenal and Nikolskaya Tower in the Fall Season 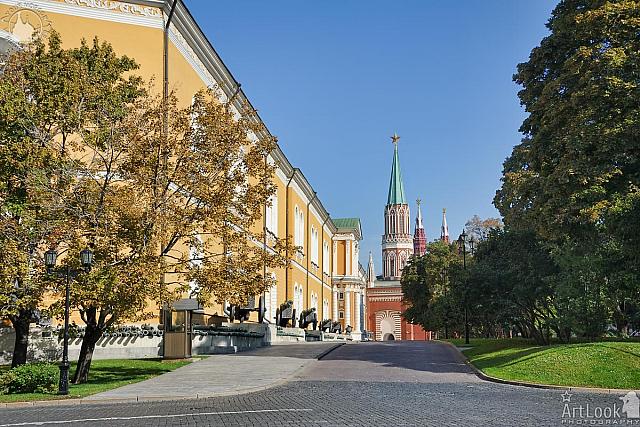 «Arsenal and Nikolskaya Tower in the Fall Season»

View from the building of the State Kremlin Palace on Arsenal building and Nikolskaya (St. Nicholas) tower of Moscow Kremlin on a nice sunny day in the Golden Autumn season.

The painted in classic yellow and white colors Arsenal building was founded by Peter the Great to replace the former Strelets compound, where the Strelets guards, backed by Princess Sophia, had plotted a conspiracy again the Czar in 1689. It was built in the 18th century but remodeled in 1828 after wars and fires. The Arsenal has long since lost its role as a military depot, and currently houses the Presidential Regiment, which guards the Kremlin. In present days, the building of Arsenal became a military memorial, having hundreds of cannons standing all around it (visible on the picture) - the trophies from the past wars. Most of in this collection are the cannons seized from French troops, which were hauled here in masse starting November 1812. Back then, cannons were considered equal to enemy flags in symbolic importance as trophies.

In the background of this picture is the back of Nikolskaya (St. Nicholas) tower and the gate that faces the Red Square and Nikolskaya street behind the Kremlin wall. The name of this tower, built in the late 15th century with the supervision of Italian architects, derives from the St. Nicholas the Senior Monastery at Nikolskaya street nearby, which was later transformed into a Greek St. Nicholas Monastery. In Soviet times, by order of Stalin, double-headed eagles as symbols of the tsarist regime were replaced with five-edge stars on the main towers of Moscow Kremlin.

Photo #014 taken on September 20, 2014 during the tour of Moscow Kremlin with my Dear clients from Australia, Paul O'Toole and his relatives.

Boat from Radisson Royal Hotel flows slowly through pieces of ice on Moscow-River near beautiful architectural ensemble of Moscow Kremlin at night.