Trophy - For Motherland - On the Roads of Yalta, Crimea (Front) 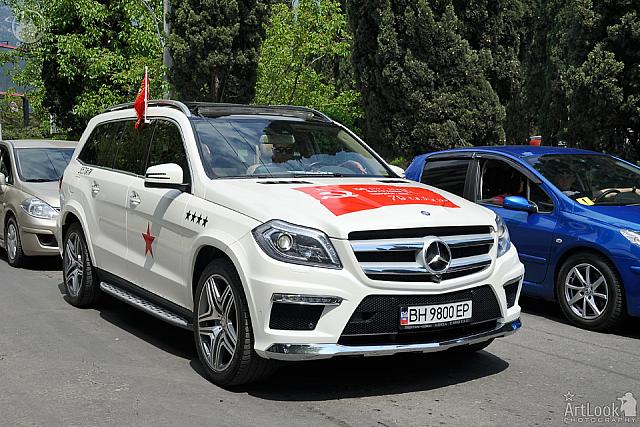 «Trophy - For Motherland - On the Roads of Yalta, Crimea (Front)»

Mercedes from Donetsk (DPR - Donets People Republic) in a traffic jam on Kievskaya street in Yalta, Crimea, is decorated for a celebration of the Day of the Great Victory with stars, flags, and signs.

May 9 - Victory Day in Russia commemorates millions of people who lost their lives in the Second World War, known in Russia as the Great Patriotic War, and honors the bravery of Russian soldiers and Russian people on the whole whose heroism saved the country from Nazi invaders.

Victory Day in Russia is celebrated on May 9. The holiday marks the capitulation of Nazi Germany to the Soviet Union in the Second World War and commemorates millions of people who lost their lives during the bloody war. According to the official statistic, 27 million Soviet people of different nationalities died at the four horrible years, among them were 10 million soldiers and 17 million civilians who punished their lives for their Motherland.

On the Road in Romanovo Village in Spring Sunset

Old Rural Houses and the Church of the Nativity of the Virgin in Romanovo village, few kilometers from Suzdal, in spring sunset on the road back to Moscow.