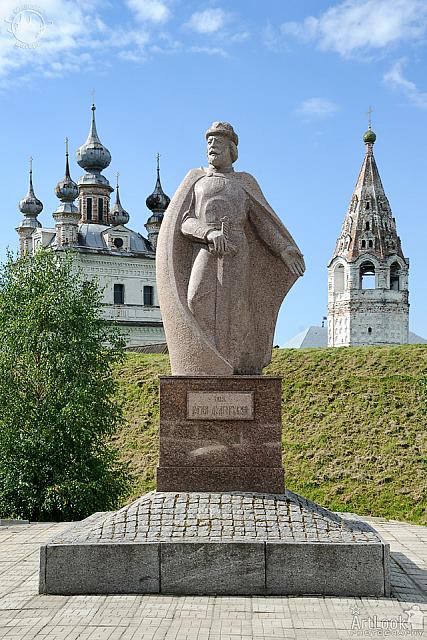 View from the central square of Yuryev-Polsky on the monument of the founder of the city, Yuri Dolgorukiy, with background the main historical and architectural sights Mikhailo-Arkhangelsky monastery and the Kremlin earthen ramparts.

The monument to the Prince of Rostov and Suzdal who founded Yuryev-Poskiy in 1152 was unveiled in 2002 to commemorate 850 anniversary of the city. The name of the town derives from St. George (Russian Yuri is one of the versions of the name George) laying in the fields (Pole, Polsky).

The monument stands in an open area and is perfectly visible from afar. Sculpture of duke carved of red granite and stands on a rectangular pedestal. His right hand gently rests on the sword and the left holds the edge of the mantle. View ancient ruler flies into the distance.

Photo #001 taken on August 17, 2017 in Yuryev-Polsky during long distance tour of the Golden Ring of Russia with my dear clients from Australia, Graeme and Kathleen Pollock and their friend Robert Watson.

Front angle view of the snow-covered Russian T-80B tank on the grounds of Vadim Zadorozhny Technics Museum in Arkhangelskoye, the western suburb of Moscow.