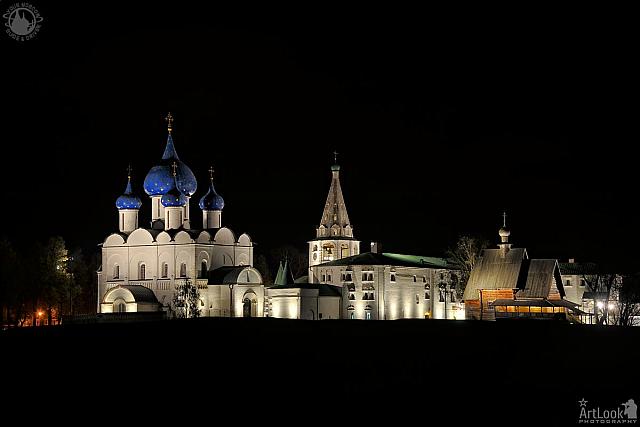 Suzdal is a spectacular ancient Russian town, renowned for its magical fairy tale appearance that attracts thousands of tourists every year. In 2015, it was decided to illuminate the town in order to showcase its beauty. The first lighting was installed to highlight the distinctive white stone and wooden architecture of the town’s main attraction – the Suzdal Kremlin.

This photograph was taken one Autumn evening in October when it was completely dark (at this time of year it gets dark quite early). Taken from the Ilya meadow, close to the Church of Elijah (Ilya) there is an uninterrupted view of the beautifully spotlit architectural ensemble of the Suzdal Kremlin (fortress/citadel). To the left stands the Nativity Cathedral (constructed between 1222-1225, and rebuilt in 1530 and 1730), then the Archbishop’s Chambers and tent-roofed bell tower (from the end of the 17th century), and on the right, the Church of St. Nicholas ( constructed of wood in the village of Grotovo in the Yuriyev-Polsky District in 1766, but later moved to the Suzdal museum in 1960).

Photo #144 taken on October 08, 2015, during a long-distance two-day countryside tour to Suzdal and Vladimir with my dear clients from USA, Steven, Rebekah, and little Owen.

On the Monastery’s Bell Tower (Zvenigorod)

My Dear clients from Hong Kong, William Szeto and Kitty Yip, on the Bell Tower of the Savvino-Storozhevsky Monastery in Zvenigorod. In the background of this picture is the ancient Nativity cathedral built in first quarter of the 15th century.