Houses and Stone Churches of Suzdal at Winter Twilight 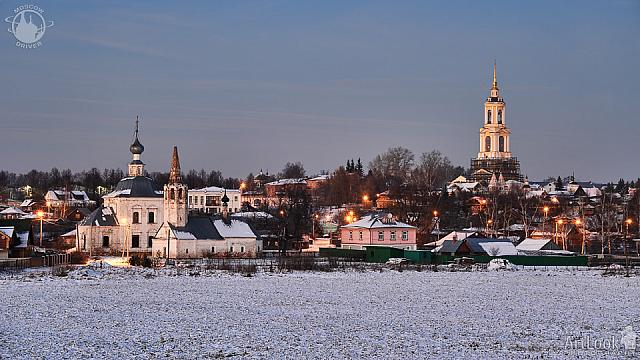 Cityscape of Suzdal from the rampart of local kremlin with a view on the wooden houses and two small stone churches standing close to each other at the beginning of winter season at twilight, when street lights were turned on with the onset of darkness.

The churches in the middle of composition were built in 18th century on site of 17th-century wooden churches that were burnt in Tanning Sloboda (suburban settlements of tanners lived right behind the fortification wall). The summer church of the Epiphany (stands behind at the left) was built in 1781 at the bend of the Kamenka river nearby the earlier constructed winter church of the Nativity of St. John the Baptist (1739) (stands forward on the right). In 1740 to the simple in architectural style the church of St. John the Baptist was added a bell tower with a concave tent-shaped spire, the feature of Suzdal architecture.

Scaffolded 70-meter bell tower built in 19th century is at the right on the picture.

Red and Yellow Tulips in Flowerbed at Livadia Palace

Beautiful colorful red and yellow tulips in a flowerbed of a fountain area at Livadia Palace in the springtime.