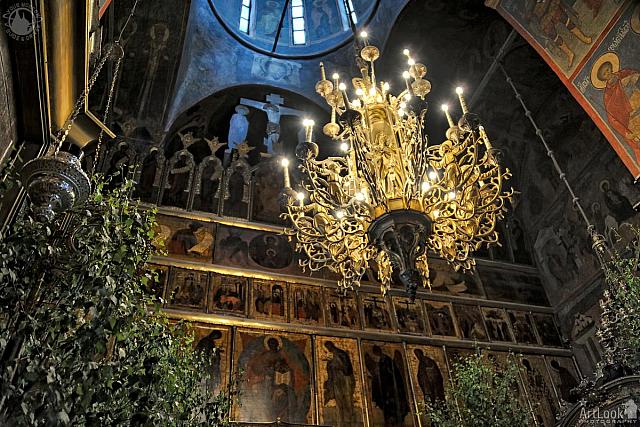 The beautiful white stone cathedral of Holy Trinity was built in 1425 by the efforts of the closest disciple and successor of St. Sergius, venerable St. Nikon. It is the most ancient church of the surviving buildings of the Holy Trinity-St. Sergius Lavra (monastery). The splendid interior of the Trinity church was painted with bright frescoes on its walls and shining gold iconostasis by outstanding iconographers St. Andrew (Andrey) Rublev and Daniel (Daniil) the Black. Here, Andrey Rublev who holds a special place in the ranks such painter-theologians, painted the icon of the Most Holy Trinity, one of the greatest works of Orthodox iconography.

This photo was taken on one of the main and favorite church feasts in Orthodox Russia, the day of the Holy Trinity (Pentecost Sunday). In the Old Testament, Pentecost was the feast, which occurred fifty days after Passover. In the Orthodox tradition, Pentecost Sunday is also called Trinity Day. On this day, the icon of the Holy Trinity—the three angelic figures who appeared to Abraham, the forefather of the Christian faith—is placed in the center of the church (a stand with the icon can be seen in the bottom middle of this image). For this feast, all Orthodox churches are decorated with flowers and the green leaves of the summer to show that God’s divine Breath comes to renew all creation as the “life-creating Spirit.”

Prayers are nonstop in this cathedral every day from 5 AM until late evening, but on the main church feast days—particularly on the day of the Holy Trinity, the main holiday of the monastery—the lights of the magnificent panikadilo (church chandelier) are left on an entire day. Thus the interior of the Trinity church at the moment when this picture was taken looks much more festive and bright than it would during an ordinary day.

Photos are not allowed in this church because of the ongoing prayers, but I was lucky to take one quick shot with a “hidden” camera that turned out pretty well and shows the splendid interior of Trinity Cathedral with its lights shining.

Photo #514 taken on June 08, 2014 during tour of Holy Trinity St. Sergius Lavra in Sergiyev Posad with my Dear client from USA, Jan Squires. 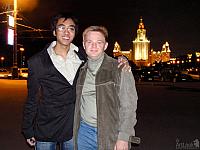 With background of MGU building

Memory photo with my Dear client Yee Sze-Voon, the student from Malaysia, during exciting Moscow by Night tour with his girlfriend Olivia, who was taking the picture of us at the moment, when we were standing together on Sparrow Hills with background of Moscow State University (MGU).