Scene of the Last Judgment 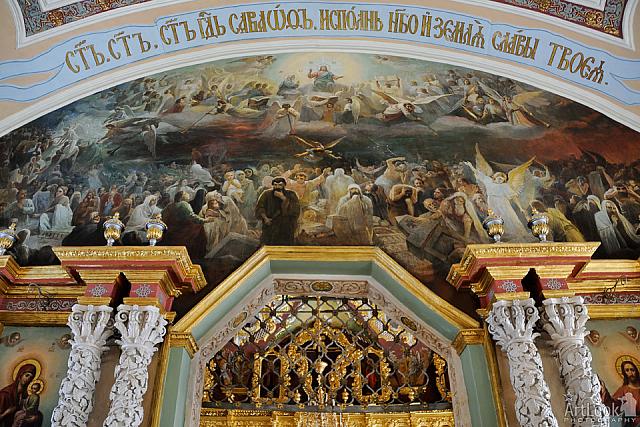 «Scene of the Last Judgment»

The huge fresco of the Last Judgment (scene from Apocalypses) above the entrance into St. Sergius church, a part of the interior of the refectory building constructed with money commissioned from Peter the Great at the end of 17th century. The last restoration of the building (middle 2014- beginning of 2015) was just completed and dedicated to 700th anniversary from birth of Venerable Sergius of Radonezh, the founder of the monastery.

On the top of the painting is written a part of liturgy prayer of “Hossana in the Highest” in Old Church Slavonic language (in which wrote all bibles, gospels books and manuscripts in medieval times). In modern Russian language: «Свят, Свят Господь Саваоф, исполнь небо и земля славы Твоея», and English translation: "Holy, Holy, Holy, Lord of Sabaoth: Heaven and earth are filled with Thy glory: Hosanna in the highest! Blessed is He that cometh in the Name of the Lord! "

Photo #200 taken on February 02, 2015 during one day countryside tour to Sergiyev Posad with my repeat Brazilian clients from USA, Orival and Pedro.