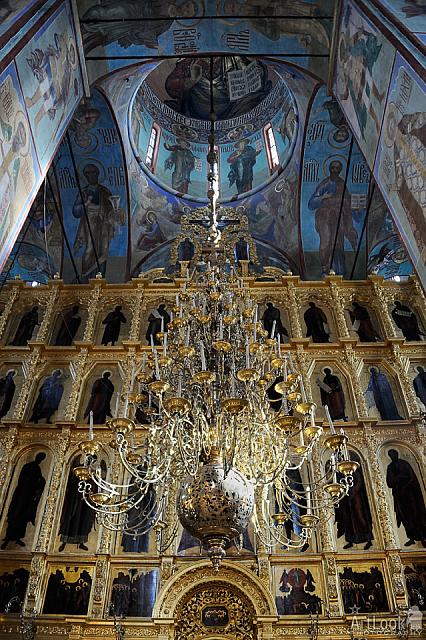 Interior of Assumption Cathedral with view of a beautiful bronze panikadilo, or church chandelier in Orthodox temple, magnificent frescoes on its walls and impressive, shining gold iconostasis in the background of the picture . The church was erected on the grounds of Holy Trinity St. Sergius Lavra in 1559-1585 by orders of the first Russian tsar, Ivan IV The Terrible, and was modeled on its namesake in Moscow Kremlin, but it is even larger. In 1684, almost a hundred years after its construction, the biggest temple on the grounds of the monastery was adorned with magnificent frescoes covering all its walls, columns and vaults by a team of 35 icon painters from Yaroslavl and Troitsk who completed their amazing work within 100 days. At that time, two bronze chandeliers made in the 17th century by craftsmen from Kremlin Armory workshops were hung to light up the large church. This picture shows the big panikadilo in front of the iconostasis of the church, which is topped with a cross, the symbol of a church.

The 5-tier high screen of icons covered with thin layer of gold (gliding) dates back to the 16th-17th centuries and consists of 76 icons. The celebrated seventieth century royal icon painter (isographer) Simon Ushakov took park in the creation of the iconostasis.

Shining chandeliers and icon stand, bright frescos and icons of the Assumption cathedral was restored in 2013-2014 in honor of celebration in summer 2014 the 700 anniversary of the birth of the patron saint of the Holy Trinity Lavra, Sergiy of Radonezh.

Photo #322 taken on February 02, 2015 during one day countryside tour to Sergiyev Posad with my repeat Brazilian clients from USA, Orival and Pedro.

View of illuminated with colorful spotlights the fountain "Friendship of Nations" on the grounds of VDNKh park in the twilight at one beautiful spring evening. The fountain was under comprehensive restoration about 1 year and it was reopened at the end of April 2019.