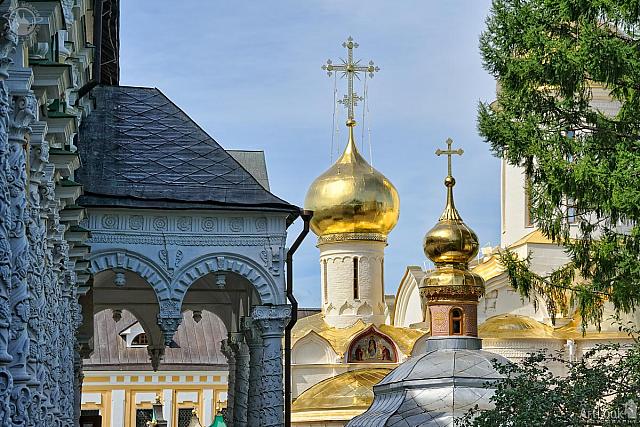 View from a wall of Refectory Chamber on the 17th-century porch, the main entrance into the hall, and gilded onion-shaped cupolas (domes) of the Church of St. Nikon (1548) and the Church of St. Micah (1734), at the right on the picture.

Photo #075 taken on July 17, 2016 in Sergiyev Posad during a long-distance countryside tour to the towns of the Golden Ring of Russia with my dear clients from the USA, Andrew and Karen Green.

View from Kosmodamianskaya Embankment on one of the famous Stalin's Seven Moscow Skyscrapers (also well known as “Seven Sisters”) built in 1947-1953 in an elaborate combination of Russian Baroque and Gothic styles. The impressive high-rise apartment building located about 1 km from Moscow Kremlin was built in 1951 at Kotelnicheskaya embankment of Moskva-Reka (Moscow River) and became residence of the elite Soviet writers and artists.