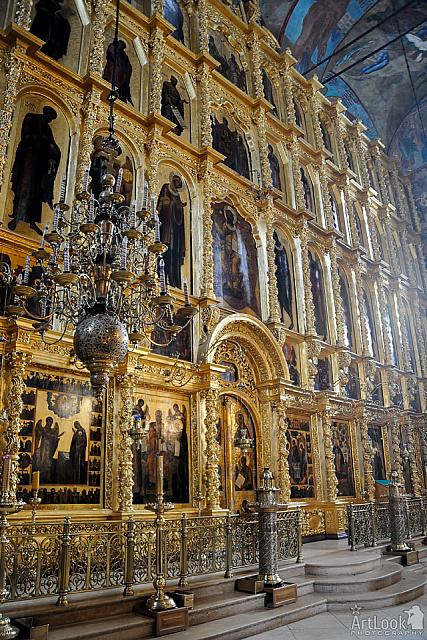 The view from left corner on the majestic richly carved gilt iconostasis of Assumption Cathedral in Holy Trinity St. Sergius Lavra. The high screen dates back to the 16th-17th centuries and consists of 5 tiers and 76 icons. The celebrated seventieth century royal icon painter (isographer) Simon Ushakov took park in the creation of the iconostasis, the one of most important parts in interior of Eastern Orthodox churches.

During the recent repair and restoration works in the Holy Trinity Lavra (2013-1014) dedicated to 700-th anniversary since the birth of its founder, St. Sergius of Radonezh (1314-2014), the renovation of the building of Assumption Cathedral were completed to the end of summer 2014 and its impressive iconostasis shining gold as new now.

In Eastern Orthodox churches, iconostasis is a vast, unbroken screen decorated with icons that separates the sanctuary (bema, the altar part) of a temple from the nave. The theme of the Sanctuary screen was brought to Russia from Byzantium, but during its evolution and adding more icons and tires (storeys) to it to the 17th-18th centuries Russian Orthodox churches possessed 4,5 or even 6 multitier iconostasis, the highest, if compare with other Orthodox countries.

Photo #302 taken on February 02, 2015 during one day countryside tour to Sergiyev Posad with my repeat Brazilian clients from USA, Orival and Pedro. 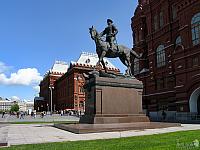 The Monument to Marshal Zhukov on Manezhnaya Square

The majestic monument to Zhukov was established at Manezhnaya Square in front of the State Historical Museum in 1995 in honor of celebrating the 50th anniversary of the Great Victory over Nazi Germany.