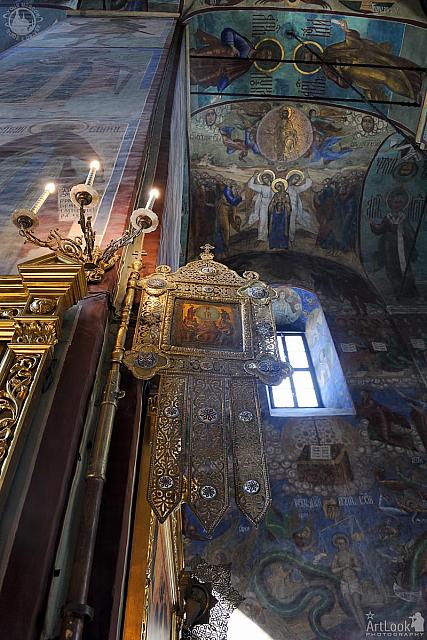 Interior of Dormition (Assumption) Cathedral of Holy Trinity-St. Sergius Lavra with a view of the Orthodox Church banner and wall decoration lamp on a pillar supporting vaults covered with 17th-century frescoes of Christ the Savior, Our Lady, saints and angels.

Photo #090 taken on September 02, 2019 during the countryside tour to Sergiyev Posad with my Dear clients from Australia, Warwick and Kathy Walesby.

The Church of the Vivifying Holy Trinity at the Borisovo Ponds is a metochion of the Patriarch of Moscow on Kashirskoe highway, a residential district of Orekhovo-Borisovo in South Moscow (on the way between city center and Domodedovo airport). The cathedral was built in 2001-2004 in Neo-Byzantine (Byzantine Revival) by architect Vladimir Kolosnitsyn in honor of the 1,000th anniversary of Christianity in Russia.