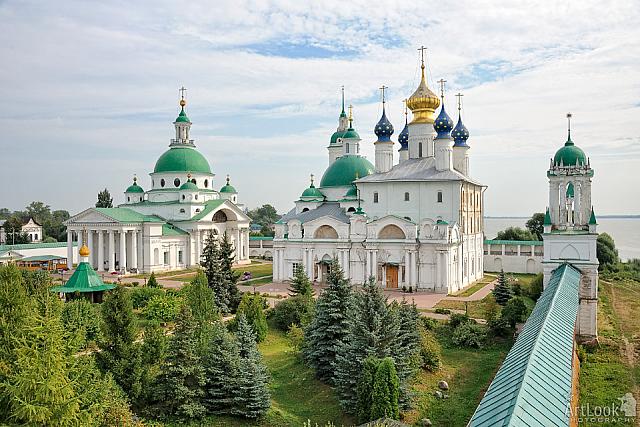 View of the architectural ensemble of Spaso-Yakovlevsky (St. Jacob Savior) monastery from the South-West tower in a cloudy summer day. The monastery was founded in the 14th century by St. Jacob (Yakov) of Rostov and located on the outskirts of Rostov Velikiy (The Great) on the shore of Lake Nero. On the picture: Dmitrievsky Cathedral (Cathedral of St. Dmitry) (at the left), Zachatievsky Cathedral (Cathedral of Conception of St Anna) with a church of St. Jacob of Rostov (at the right), fortification walls and beautiful towers. Most of the monastery structures were built in the late 18th and early 19th centuries in the fine neoclassical style.

The first river artillery boats (armored boats) were developed in 1935 for actions on rivers, lakes and sea shallows. The tank gun turrets, the armored car machine-gun turrets and rocket weapon (the “Katyushas») were mounted on them. During the Great Patriotic War 1941-1945 the armored boats were com¬missioned to the river and lake flotillas.