Church of St. Nicholas on Podezere and Log House Under Clouds 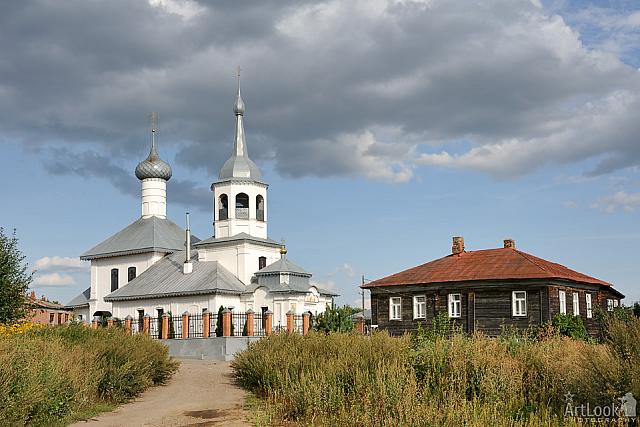 «Church of St. Nicholas on Podezere and Log House Under Clouds»

The Church St. Nicholas the Wonder Worker on Podezere* was constructed in 1745 on donations from local parishioners. In Rostov folklore it is still kept saying: “By Nicola** the hills are steep” (U Nikoly** kruty gory). Indeed, the church stands on a hill with scenic views of the Rostov’s lake Nero and Podozerku*.

There are two altars in the church, one - in the name of St. Nicholas and another - dedicated to the Icon of the Mother of God "Joy of All Who Sorrow". As religious house it was closed in the 1930s and reopened in 1998 when it was returned to the Church. Onion silver cupola (dome) with drum and bell tower of the church were restored in 2000-2002.

St. Nicholas the Wonder Worker on Podezere* is assigned to the Nativity convent (Rozhdevstvensky Monastyr) of Rostov Velikiy.

*Podozere, Podozerka – the area near a lake that can be translated as “Under the Lake”
**Nicola, Nikola – short name from Nicholas

The impressive golden onion shape domes of the main cathedral of St. Nicholas monastery in Pereslavl-Zalessky shine with crosses on a bright sun against the blue sky. The beautiful St. Nicholas church was built in 1999-2003 in the style of XIV-XVI century Russian architecture (design by architect V.