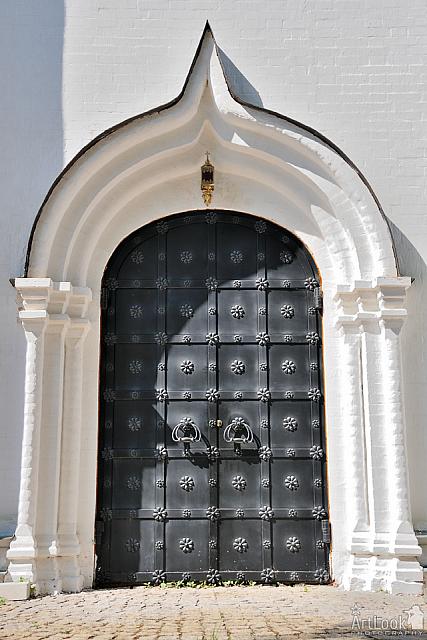 The entrance from South into the Nikolsky Sobor (Cathedral of St. Nicholas) with a pair of nicely decorated iron doors and ancient-style curved arch above it. The new church on the grounds of St. Nicholas convent was built in 1999-2003 by project of the architect V. Izhikov on the model magnificent Assumption Cathedral of the Kievsko-Pechorskaya Lavra.

Photo #474 taken on June 08, 2014 during one-day countryside tour to Pereslavl-Zallesky and Sergiyev Posad with my Dear client from USA, Jan Squires.

In October 10-14, 2014, the Fourth Moscow International Festival «Circle of Light» run the journey «Around the world in less than an hour» in the the seven famous Moscow city locations: Ostankino, VDNH, The Bolshoi theater and part of the Kuznetskiy Most street, Tsaritsyno park, interactive Media cube on Mahezhnaya Square and the Digital October center.