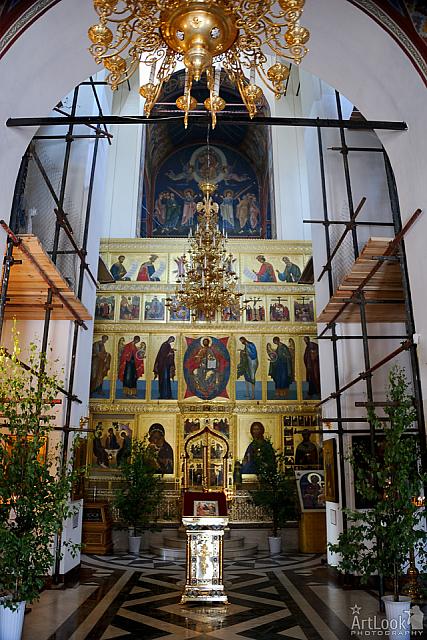 The new Nikoslky Sobor (St. Nicholas Cathedral), the main church of the Holy-St. Nicholas convent in Pereslavl-Zalessky was built in 1999-2003 on the model of the Assumption Cathedral of the Kievsko-Pechorskaya Laura by project of architect is V. Izhikov. In 2013 a number of artists started to adorn its interior with beautiful wall paintings and frescoes with the blue background (you can see as an example on the top of the picture, above massive iconostasis). On the moment when this photo was taken, the church was scaffolding inside and the local staff told me that the interior works would not finish until the next year.

The picture taken on one of the main and favorite church feasts in Orthodox Russia, the day of the Holy Trinity (Pentecost Sunday). In the Old Testament Pentecost was the feast, which occurred fifty days after Passover. In the Orthodox tradition Pentecost Sunday is also called Trinity Day. On this day, the icon of Holy Trinity with the three angelic figures who appeared to Abraham, the forefather of the Christian faith, is placed in the center of the church (a stand with icon in the bottom middle of this image). The church building is decorated with flowers and the green leaves of the summer to show that God’s divine Breath comes to renew all creation as the “life creating Spirit.”

Photo #470 taken on June 08, 2014 during one-day countryside tour to Pereslavl-Zallesky and Sergiyev Posad with my Dear client from USA, Jan Squires