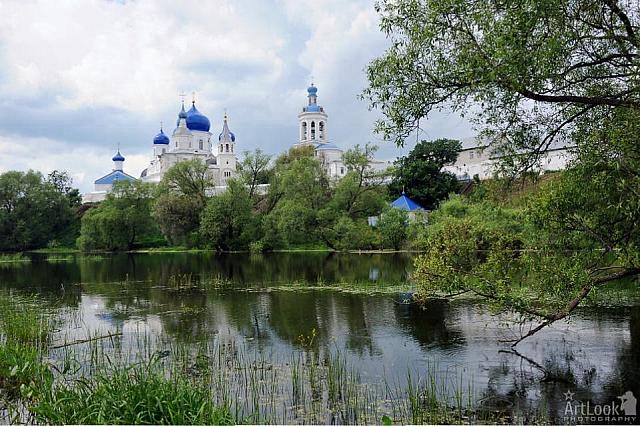 Panorama from local pond of the Holy-Bogolyubski convent located in Bogolyubovo village, 13 km (8 mi) North-East of ancient city of Vladimir. The settlement Bogolyubovo was founded by Prince of Vladimir Andrei Bogolyubski in 1158. The story of the foundation of his suburban residence bound up with the cult of the icon of the virgin of Vladimir. According to legend, the horses drawing the cart carrying the icon unexpectedly stopped at this spot, few miles from Vladimir. Prince Andrei (Andrew) had to spend a night on this spot and saw Our Lady who ordered him to found the settlement and to build the monastery. During a short period (1158–1165), the palace and fortifications were constructed. Unfortunately the princely castle not survived on the grounds of the convent, but it contains remains of 12th century Cathedral of the Nativity of the Virgin and the Staircase Tower of Andrei Bogolyubski that have been inscribed into the UNESCO World Heritage List. The exiting complex of buildings on the picture were formed in 18-19 centuries.

In the Upper Alexander Garden, near Kremlin wall and Arsenalnaya (Arsenal) tower it is located Tomb of the Unknown Soldier, the main memorial in Russia to the Soviet soldiers who died in the Great Patriotic War 1941-1945 (WWII). It was unveiled in December 1966 when Soviet Union (USSR) celebrating the 25th anniversary of its victory over Nazi troops in the battle of Moscow.