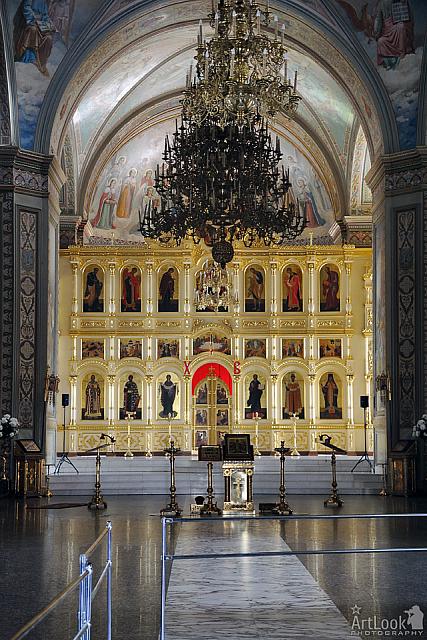 The grand five-dome cathedral created in honor of the Bogolyubskaya icon of Mother of God was built on the grounds of the convent in Bogolyubovo in 1855-1866 using the funds of the Moscow's merchant woman - Anna Gerasimovna Alekseyeva and her sons. The provincial architect Ya. M. Nikiforov took exemplary developments of Konstantin Ton (famous Moscow architect who built cathedral of Christ the Savior) as a basis for design for one of the greatest cathedrals in Central Russia that can fit up to 5 thousand believers. Unfortunately, the original frescos and gilded iconostasis (stand with icons) that adorned the interior of the cathedral in the 1870s were lost during Soviet times. In 1997 the restoration of this monastery has began. The restoration of the cathedral was finished in 2013. Its walls were repainted using oil pain once again by using the same classical academic style of icon painting. During reconstruction, the new shining gold iconostasis and bronze church chandeliers were set up, and the ceramic tile floors were built. In present days, Bogolyubsky cathedral looks magnificent and inspiring once again. It is strictly forbidden to take pictures inside the church, so it wasn't easy to take this photo – quick (hidden) shot at the entrance of the cathedral.