In a Circle at the Zero Kilometer of Russian Roads 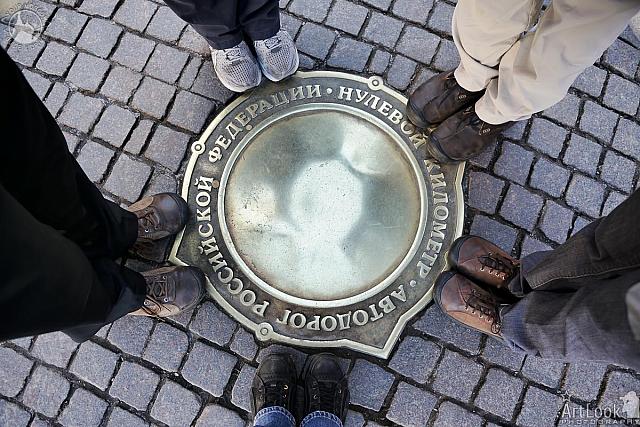 «In a Circle at the Zero Kilometer of Russian Roads»

Shoes of mine and my Dear clients from the USA, Bill, Cheney, Rick, and Lynn, standing in a circle at the kilometer Zero of the roads of the Russian Federation near the entrance to the Red Square during Moscow city tour.

In many countries, Kilometre Zero (also written km 0) is a particular location (often in the nation's capital city), from which distances are traditionally measured. They were markers where drivers could set their odometers to follow directions in early guide books. The most famous such marker of which any part survives from ancient times is the Milliarium Aureum ("Golden Milestone") of the Roman Empire, believed to be the literal origin for the maxim that "all roads lead to Rome".

In Russia, the bronze sign called “The Zero Kilometer of Automobile Roads of Russian Federation” is located in the very city center, at the passage of Resurrection Gates that connects the Red Square with Manezhnaya Square. It. The marker was designed by Russian sculptor A. Rukavishnikov wand placed at the side of the State Historical Museum in front of the Resurrection Gates in 1995. Initially, the Zero Kilometer sign they intended to place on the line between Lenin's Tomb (Mausoleum) and GUM at the Red Square, although the official point is located at Central Post office at the beginning of Tverskaya Street, also not far from its current location (between Red Square and Central Post Office).

During the past 10 years, this place became very popular for tourists coin over left shoulder for good luck, but my clients and I decided to make something different and encircle all together with the Russian Zero Mile marker for memory and fun.

For many years on the grounds of Pokrovsky convent in Suzdal was situated the Pokrovskaya Hotel styled in the form log houses or izbas, a traditional Russian countryside dwelling. The hotels of small wooden houses decorated in a traditional Russian style was very popular among foreign tourists.