Colorful Platan of Isadora Duncan at Embankment of Yalta at Night 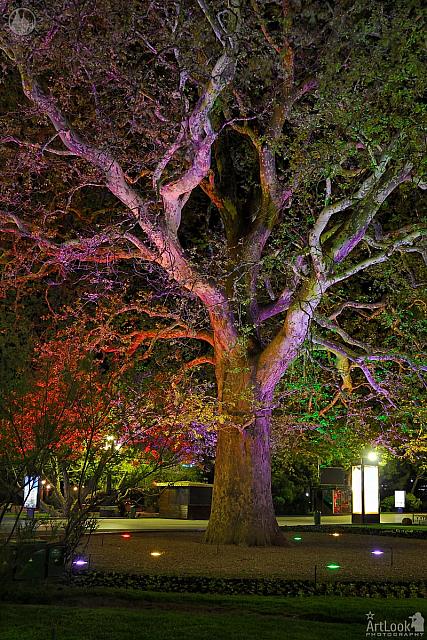 Illuminated in different colors at night the giant platan (oriental plane or Platanus orientalis) adorning the embankment of Yalta, South coast of Crimea. The oriental plane is among the largest and most well-known tree exemplars in Crimean Peninsula. Its height is about 25 m and trunk circumference at the breast height – 570 cm (measured in 2013).

The platan is named after the famous American dancer Isadora Duncan, who admired the tree when she was in Yalta during her Crimean tour in 1923, and under which she appointed meetings to Sergei Yesenin (1895-1925), the famous Russian poet. In the development of the legend, in 2011 the local authorities founded an original bronze monument – «The Bench of Love» dedicated to all lovers at the plane.

Unfortunately, the beautiful legend is just a fiction. Yesenin together with Isadora never visited Crimea. In 1923 at the end of the summer, after her foreign tour Isadora, really went to the south – to the Crimea and to the Caucasus. Being madly in love with the poet, she really wanted him to come to her, and sent him passionate telegrams. However, instead of Sergei Alexandrovich arrival, she received his killing lines: «I love another. I am married and happy. Yesenin». It was the end of their relationship.

From Wiki: Platanus orientalis, or oriental plane (Russian: Platan), is a large, deciduous tree of the Platanaceae family, growing to 30 m (98 ft) or more, and known for its longevity and spreading crown.

Spectacular View from a Corner of the Faceted Palace

Amazing gilded domes and crosses of Terem Churches and a Church of the Deposition of the Virgin's Robe, shining on the sun from the corner of Faceted Palace (at the left on this picture). These beautiful domes impress all visitors of the Moscow Kremlin, and everybody tries to take a picture of these amazing bulbous cupolas, especially if the weather treats the photographer with a sunny weather and a beautiful sky with puffy, white clouds.