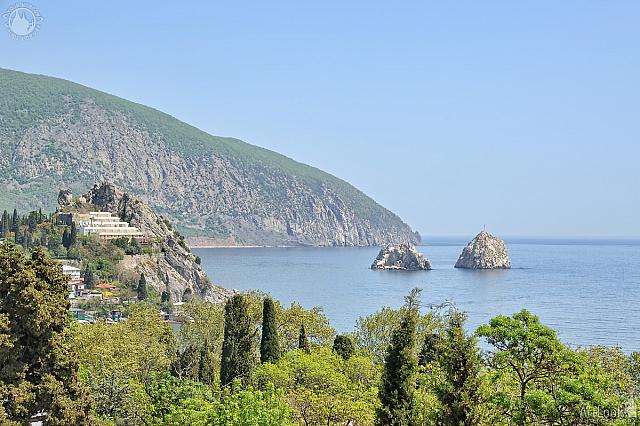 «Skalny Hotel and Adalary Rocks in Gurzuf»
Buy this Photo

The splendid landscape of Gurzuf with the view from a guest house on the bay, two twin-cliffs Adalary, and the Skalny (Rocky) hotel located on the Genoese's Rock near the remains of an ancient fortress in the background of the mountain Au-Dag. Between the Genoese's Rock and the mountain is located well-known from Soviet times the International Children's Camp Artek. The mountain Au-Dag nicknamed as “Bear Mountain” because of it looks like a bear that drinks water from the Black Sea.

The famous Adalary rocks are located in Gurzuf Bay about 300 meters (1000 ft) from the coast and remind miniature Gothic castles. The distance between the rocks is about 40 meters (130 ft). The name “Adalary” translated from Turkic means island. The height of the first (at the left) - 35 meters and a height of the second (at the right) - 48 meters. Long ago, these rocks have been connected with the shore, there was a natural bridge. But over time, the seawater destroyed the bridge under water and now visible only by their remains, covered with algae. 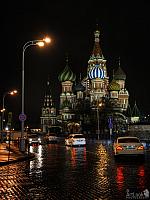 Traffic at St. Basil’s Cathedral on a Rainy Evening

Late autumn view of St. Basil’s cathedral on a rainy evening from a corner of GUM building, the State Department Store at Red Square.