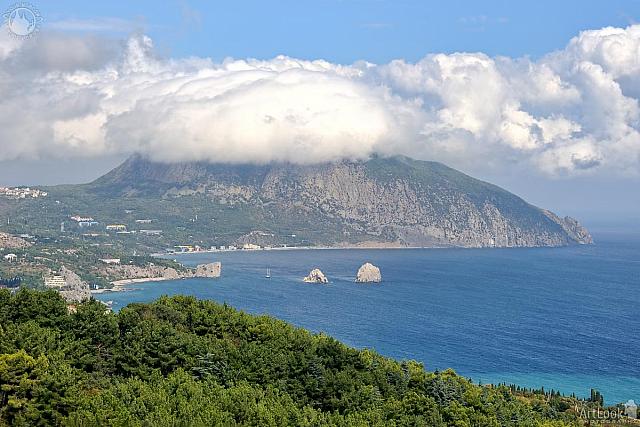 The impressive clouds hang over mountain Au-Dag nicknamed as “Bear Mountain” because of it looks like a bear that drinks water from Black Sea. On this picture the clouds look as a cover for the “bear”. At the right side of Au-Dag, near the foot of Bear Mountain, is located Artek, an international children center (a former Young Pioneer camp), not far from Gurzuf, a resort-town (urban settlement) in South of Crimea, Ukraine (you can see the buildings at the left on this picture).

Au-Dag is covered with legends. In ancient times the mountain caused the sacred feeling of nature's power. According to an old legend, a giant bear who lived here became a stone, trying to drink the sea and to stop fugitives. Au-Dag is a unique place for archeologists. Here they found the ruins of 7 christian churches, built on the place of earlier pagan temples. The mountain is 572 m (1877 ft) high, its length is 2.5 km (1,5 mi). It appeared in middle-Jurassic stage of geological history, that was about 160 million years ago. Hot magma (molten rock that sometimes forms beneath the surface of the earth) hardened in the sedimentary rocks. Such mountains are called «laccolith». The mountain Au-Dag is one of famous symbols of Crimea.

Right in front the mountain you can see another beautiful sight of Gurzuf - Rocks Adalary, the two rocks located 300 meters (about 1000 ft) from the coast. They remind miniature Gothic castles and the distance between them is about 40 (130 ft) meters. The name “Adalary” translated from Turkic means island. The height of the first (at the left) - 35 meters and a height of the second (at the right) - 48 meters. Long ago, these rocks have been connected with the shore, there was a natural bridge. But over time, the sea water destroyed the bridge under water and now visible only by their remains, covered with algae. About Rock Adalary go different legends as well.

Photo #271 taken on September 14, 2013 from the South coastal highway on the way from Yalta to Gurzuf.

Festively decorated for winter holidays with garlands and light installations floating bridge and pier of Zaryadye park at Moskvoretskaya Embankment with a reflection on the surface of the non-frozen yet river Moskva (Moscow) on New Year’s Eve, in the first hours of 2019.